Boy Scouts on the Great Divide or, The Ending of the Trail 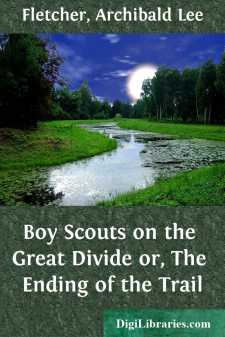 On a sunny September afternoon two shelter tents stood in a mountain valley, on the south bank of a creek which, miles and miles below, becomes the Sweetwater river.

Above the flap of each tent lifted a yellow pennant, in the center of which a blue beaver stood in an alert and listening attitude, his flat tail outstretched.

A campfire blazed in front of the two tents, and some distance away four bronchos fed noisily on the sweet grass of the valley. Tinned provisions and cooking utensils were scattered here and there in front of the blaze, and four boys wearing the khaki uniform of the Boy Scouts of America were busily engaged in preparing supper.

Those who have read the previous volumes of this series will require no introduction to Will Smith, George Benton, Charley (Sandy) Green, or Tommy Gregory. As will be remembered, they were all members of the Beaver Patrol, Chicago. Will Smith had recently been advanced to the important position of Scoutmaster, and George Benton had been elected to the position left vacant by the advancement of his chum, that of Patrol Leader. Besides carrying the badges of their offices and their patrol, the boys all wore medals showing that they had qualified in the Stalker, Ambulance, Seaman and Pioneer grades.

After rather striking adventures on Lake Superior and in the Florida Everglades the boys had been persuaded by Mr. Horton, a well-known criminal lawyer of Chicago, to undertake a mission in the interest of a client in whom he had become greatly interested. The lads had already arranged a vacation trip to the Great Divide, and it necessitated only a slight change in their program in order to make the investigation desired by the attorney, who had shown himself their friend on more than one occasion. In fact, the Superior trip had been taken at his expense.

Mr. Horton had presented the request which had changed the lads' vacation plans on the night before they left Chicago, and so no details whatever of the case had been given them. They had been asked to proceed to the city of Green River, in the state of Wyoming, and there secure burros, provisions and tents and travel to the valley lying south and west of Altantic peak.

The noted attorney had informed them on the morning of their departure that, in case further instructions did not reach them by wire before they came to Green River, a messenger would follow them into the mountains with full details, and also a history of the case in which they were to be employed. On this sunny afternoon they were awaiting the arrival of the messenger, no information having been received by telegraph.

The tents had been set up on the previous evening, and the boys did not think it possible that the messenger could be more than twenty-four hours behind them. While they waited for the supper to cook they watched the country off to the south anxiously.

"Last call for supper!" cried Sandy, spreading a great white cloth on the fragrant grass of the valley. "We can eat out-doors in this country without any danger of people butting in to see what we've got for supper."