Boy Scouts on a Long Hike Or, To the Rescue in the Black Water Swamps 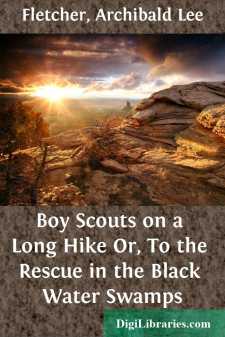 THE BOYS OF THE BEAVER PATROL

"They all think, fellows, that the Beaver Patrol can't do it!"

"We'll show 'em how we've climbed up out of the tenderfoot class; hey, boys?"

"Just watch our smoke, that's all. Why, it's only a measly little twenty-five miles per day, and what d'ye think?"

"Sure Seth, and what's that to a husky lot of Boy Scouts, who've been through the mill, and wear merit badges all around? Huh! consider it as good as done right now!"

Half a dozen boys who wore khaki uniforms, were chattering like so many magpies as they stood in a little group on an elevation overlooking the bustling Indiana town of Beverly.

Apparently they must have been practicing some of the many clever things Boy Scouts delight to learn, for several of the number carried signal flags; two had pieces of a broken looking-glass in their possession; while the tall lad, Seth Carpenter, had a rather sadly stained blanket coiled soldier fashion about his person, that gave off a scent of smoke, proving that he must have used it in communicating with distant comrades, by means of the smoke code of signals.

Besides Seth there were in the group Jotham Hale, Eben Newcomb, Andy Mullane, Fritz Hendricks, and a merry, red-faced boy who, because of his German extraction, went by the name of "Noodles Krafft."

The reader who has not made the acquaintance of these wide-awake scouts in previous volumes of this Series will naturally want to know something about them, and hence it might be wise to introduce the members of the Beaver Patrol right here.

Eben was the official bugler of Beverly Troop. He had been made to take this office much against his will, and for a long time had the greatest difficulty in getting the "hang" of his instrument, so that his comrades guyed him most unmercifully over the strange medleys he used to bring forth when meaning to sound the various "calls." But of late Eben seemed to have mastered his silver-plated bugle, and was really doing very well, with an occasional lapse excepted.

Andy was a Kentucky boy, but outside of a little extra touch of pride, and a very keen sense of his own honor, you would never know it.

Seth was the champion signal sender, and delighted to study up everything he could discover concerning this fascinating subject.

Fritz, on his part, chose to make an especial study of woodcraft, and was forever hunting for "signs," and talking of the amazing things which the old-time Indians used to accomplish along this line.

As for good-natured Noodles, if he had any specialty at all, it lay in the art of cooking. When the boys were in camp they looked to him to supply all sorts of meals that fairly made their mouths water with eagerness to begin operations long before the bugle of Eben sounded the "assembly."

Last of all the group, was Jotham Hale, a rather quiet boy, with an engaging face, and clear eyes. Jotham's mother was a Quaker, or at least she came from the peace-loving Friends stock; and the lad had been early taught that he must never engage in fights except as a very last resort, and then to save some smaller fellow from being bullied....