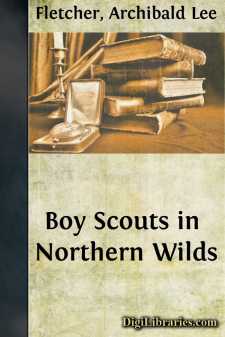 CHAPTER I A CAMP ON MOOSE RIVER

Four Boy Scouts, of the Beaver Patrol, Chicago, were in camp on Moose river. They were all athletic young fellows, not far from seventeen years of age, and were dressed in the khaki uniform adopted by the Boy Scouts of America.

If you take a map of the British Northwest Territories and look up Moose river, you will discover that it runs through nearly three hundred miles of wilderness, from Lake Missinale to Moose Bay. The reader will well understand, then, how far "Sandy" Green, Will Smith, George Benton and Tommy Gregory had traveled from civilization.

The camp of the Boy Scouts was situated some fifty miles up the river from Moose Factory, a trading point famous in old Indian days for its adventurous spirits and its profits to the factors. Those who have read the preceding books of this series will doubtless remember the four Boy Scouts named above. Together they had visited the Pictured Rocks of Old Superior, the Everglades of Florida, and the great Continental Divide.

During all their journeys the boys had shown courage and resourcefulness beyond their years, and because of these qualities they had been chosen, by Mr. Horton, a noted criminal lawyer of Chicago, to undertake a difficult and dangerous mission to the Hudson Bay country.

They had traveled by way of the Canadian Pacific to Missanabie, from which point they had proceeded to Lake Missinale. Here they had purchased a "Mackinaw," a great flat-bottomed craft, in which to transport their tents and supplies down Moose river to the bay of the same name.

They had made most of the journey in native canoes, which they had learned to handle with considerable skill, but now and then they had taken refuge on the big boat, "just to stretch their limbs," as they expressed it. They left Chicago late in September and it was now almost the last of October.

Those who live in the Hudson Bay country declare that they have three seasons in four months, Spring comes in June, summer in July and August, and autumn in September. At the southern extremity of James Bay, October may scarcely be called a winter month, although during the latter part of the month ice and snow are not infrequent.

The sun was setting on the lads' first day in camp as the boys rested from their labor of dragging in great quantities of both dry and green wood. Their tents were of double canvas, specially prepared for cold weather, and their bedding and suits had constituted an important part of their baggage.

Almost the entire fronts of the tents were composed of fine, strong silk mesh-cloth. The faces of the boys were well anointed with grease, and masks of mesh-cloth hung about the tents ready for use.

Mosquitos and an insect known as the "bull-dog" had driven many a trapper and hunter out of the swampy regions around Hudson Bay. During the summer it is almost impossible to live in the swamps of that country at all. By protecting their tents and faces, and keeping great "smudges" going, the boys hoped to be able to live in comparative comfort during their stay in that section....