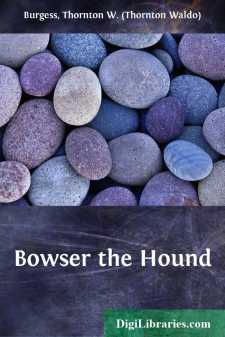 CHAPTER I OLD MAN COYOTE LEADS BOWSER AWAY Though great or small the matter proveBe faithful in whate'er you do.'Tis thus and only thus you mayTo others and yourself be true. Bowser the Hound.

Old Man Coyote is full of tricks. People with such clever wits as his usually are full of tricks. On the other hand Bowser the Hound isn't tricky at all. He just goes straight ahead with the thing he has to do and does it in the most earnest way. Not being tricky himself, he sometimes forgets to watch out for tricks in others.

One day he found the fresh trail of Old Man Coyote and made up his mind that he would run down Old Man Coyote if he had to run his legs off to do it. He always makes up his mind like that whenever he starts out to hunt. You know there is nothing in the world Bowser enjoys quite so much as to hunt some one who will give him a long, hard run. Any time he will go without eating for the pleasure of chasing Reddy or Granny Fox, or Old Man Coyote.

Now Old Man Coyote was annoyed. He was and he wasn't afraid of Bowser the Hound. That is to say he was afraid to fight Bowser, but he wasn't afraid to be hunted by Bowser, because he was so sure that he was smart enough to get away from Bowser. If Bowser had appeared at almost any other time Old Man Coyote wouldn't have been so annoyed. But to have Bowser appear just then made him angry clear through. You see he had just started out to get his dinner.

"What business has that good-for-nothing dog over here anyway, I'd like to know," he muttered, as he ran swiftly through the Green Forest. "What right has he to meddle in other folks' business? I'll just teach that fellow a lesson; that's what I'll do! I'll teach him that he can't interfere with me not be sorry for it."

So Old Man Coyote ran and ran and ran, and never once did he try to break his trail. In fact, he took pains to leave a trail that Bowser could follow easily. After him Bowser ran and ran and ran, and all the time his great voice rang out joyously. This was the kind of a hunt he loved. Out of the Green Forest into the Old Pasture, Old Man Coyote led Bowser the Hound. Across the Old Pasture and out on the other side they raced. Farther and farther away from home Old Man Coyote led Bowser the Hound. Instead of circling back as usual, he kept on. Bowser kept on after him. By and by he was in strange country, country he had never visited before. He didn't notice this. He didn't notice anything but the splendid trail Old Man Coyote was making. He didn't even realize that he was getting tired. Always in his nose was the tantalizing scent of Old Man Coyote. Bowser was sure that this time he would catch this fellow who had fooled him so often before.

CHAPTER II OLD MAN COYOTE PLAYS A TRICK Of people who play tricks beware,Lest they may get you in a snare.You cannot trust them, so watch outWhenever one may be about. Bowser the Hound.

There is such a thing as being too much interested in the thing you are doing. That is the way accidents very often happen. A person will get so interested in something that he will be blind and deaf to everything else, and so will walk straight into danger or trouble of some kind.

Now just take the case of Bowser the Hound. Bowser was so interested in the chase of Old Man Coyote that he paid no attention whatever to anything but the warm scent of Old Man Coyote which the latter was taking pains to leave. Bowser ran with his nose in Old Man Coyote's tracks and never looked either to left or right....