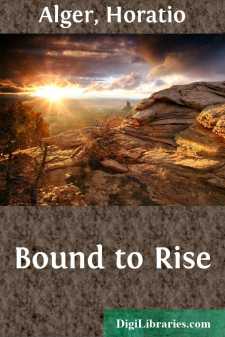 "Sit up to the table, children, breakfast's ready."

The speaker was a woman of middle age, not good-looking in the ordinary acceptation of the term, but nevertheless she looked good. She was dressed with extreme plainness, in a cheap calico; but though cheap, the dress was neat. The children she addressed were six in number, varying in age from twelve to four. The oldest, Harry, the hero of the present story, was a broad-shouldered, sturdy boy, with a frank, open face, resolute, though good-natured.

"He'll be in directly. He went to the store, and he may stop as he comes back to milk."

The table was set in the center of the room, covered with a coarse tablecloth. The breakfast provided was hardly of a kind to tempt an epicure. There was a loaf of bread cut into slices, and a dish of boiled potatoes. There was no butter and no meat, for the family were very poor.

The children sat up to the table and began to eat. They were blessed with good appetites, and did not grumble, as the majority of my readers would have done, at the scanty fare. They had not been accustomed to anything better, and their appetites were not pampered by indulgence.

They had scarcely commenced the meal when the father entered. Like his wife, he was coarsely dressed. In personal appearance he resembled his oldest boy. His wife looking up as he entered perceived that he looked troubled.

"What is the matter, Hiram?" she asked. "You look as if something had happened."

"Nothing has happened yet," he answered; "but I am afraid we are going to lose the cow."

"Going to lose the cow!" repeated Mrs. Walton in dismay.

"She is sick. I don't know what's the matter with her."

"Perhaps it is only a trifle. She may get over it during the day."

"She may, but I'm afraid she won't. Farmer Henderson's cow was taken just that way last fall, and he couldn't save her."

"I have been to Elihu Perkins, and he's coming over to see what he can do for her. He can save her if anybody can."

The children listened to this conversation, and, young as they were, the elder ones understood the calamity involved in the possible loss of the cow. They had but one, and that was relied upon to furnish milk for the family, and, besides a small amount of butter and cheese, not for home consumption, but for sale at the store in exchange for necessary groceries. The Waltons were too poor to indulge in these luxuries.

The father was a farmer on a small scale; that is, he cultivated ten acres of poor land, out of which he extorted a living for his family, or rather a partial living. Besides this he worked for his neighbors by the day, sometimes as a farm laborer, sometimes at odd jobs of different kinds, for he was a sort of Jack at all trades. But his income, all told, was miserably small, and required the utmost economy and good management on the part of his wife to make it equal to the necessity of a growing family of children.

Hiram Walton was a man of good natural abilities, though of not much education, and after half an hour's conversation with him one would say, unhesitatingly, that he deserved a better fate than his hand-to-hand struggle with poverty....