Borneo and the Indian Archipelago with drawings of costume and scenery 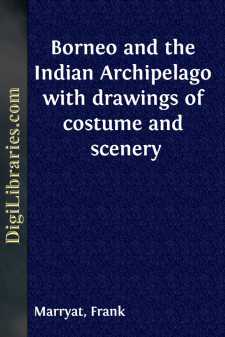 On the 25th of January, 1843, H. M. S. Samarang, being completely equipped, went out of Portsmouth harbour and anchored at Spithead. The crew were paid advanced wages; and, five minutes after the money had been put into their hats at the pay-table, it was all most dexterously transferred to the pockets of their wives, whose regard and affection for their husbands at this peculiar time was most exemplary. On the following day, the crew of the Samarang made sail with full hearts and empty pockets.

On the 25th February, sighted Fuerto Ventura: when off this island, the man at the mast-head reported a wreck in sight, which, as we neared it, appeared to be the wreck of a brig. Strange to say, the captain recognised it as an old acquaintance, which he had seen off Cape Finisterre on his return from China in the Sulphur. If this was not a mistake, it would be evidence of a southerly current in this quarter of the Atlantic. This may be, but I do not consider the proof to be sufficient to warrant the fact; although it may lead to the supposition. If this was the wreck seen at such a long interval by the captain, a succession of northerly winds and gales might have driven it down so far to the southward without the assistance of any current. It is well known that the great current of the Atlantic, the gulf stream (which is occasioned by the waters, being forced by the continuous trade winds into the Gulf of Mexico, finding a vent to the northward by the coast of America, from thence towards Newfoundland, and then in a more easterly direction), loses its force, and is expended to the northward of the Western Islands; and this is the cause why so many rocks have been yearly reported to have been fallen in with in this latitude. Wrecks, all over the Atlantic, which have been water-logged but do not sink, are borne by the various winds and currents until they get into the gulf stream, which sweeps them along in its course until they arrive to where its force is expended, and there they remain comparatively stationary. By this time, probably, years have passed, and they are covered with sea-weeds and barnacles, and, floating three or four feet out of the water, have every appearance of rocks; and, indeed, if run upon on a dark night, prove nearly as fatal.

March 3rd.—Anchored off the town of Porto Praya, Island of St. Jago, in nine fathoms. Porto Praya is a miserable town, built on a most unhealthy spot, there being an extensive marsh behind it, which, from its miasma, creates a great mortality among the inhabitants. The consul is a native of Bona Vista: two English consuls having fallen victims to the climate in quick succession, no one was found very willing to succeed to such a certain provision from the Foreign Office. The interior of the island is, however, very different from what would be expected from the sight of Porto Praya. Some of the officers paid a visit to the valley of St. Domingo, which they described as a perfect paradise, luxuriant with every tropical fruit. Porto Praya is renowned for very large sharks. I was informed by a captain in Her Majesty's service, that once, when he anchored at Porto Praya, he had left the ship to go on shore in one of the twenty-two-foot gigs, not unaptly nick-named coffins in the service. He had not pulled more than a cable's length from the ship, when a shark, nearly as long as the gig, came up swimming with great velocity after them; and as he passed, the animal shouldered the boat, so as nearly to upset it: as it was, the boat took in the water over the gunwale....