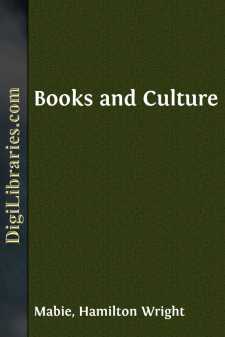 If the writer who ventures to say something more about books and their uses is wise, he will not begin with an apology; for he will know that, despite all that has been said and written on this engrossing theme, the interest of books is inexhaustible, and that there is always a new constituency to read them. So rich is the vitality of the great books of the world that men are never done with them; not only does each new generation read them, but it is compelled to form some judgment of them. In this way Homer, Dante, Shakespeare, Goethe, and their fellow-artists, are always coming into the open court of public opinion, and the estimate in which they are held is valuable chiefly as affording material for a judgment of the generation which forms it. An age which understands and honours creative artists must have a certain breadth of view and energy of spirit; an age which fails to recognise their significance fails to recognise the range and splendour of life, and has, therefore, a certain inferiority.

We cannot get away from the great books of the world, because they preserve and interpret the life of the world; they are inexhaustible, because, being vitally conceived, they need the commentary of that wide experience which we call history to bring out the full meaning of the text; they are our perpetual teachers, because they are the most complete expressions, in that concrete form which we call art, of the thoughts, acts, dispositions, and passions of humanity. There is no getting to the bottom of Shakespeare, for instance, or to the end of his possibilities of enriching and interesting us, because he deals habitually with that primary substance of human life which remains substantially unchanged through all the mutations of racial, national, and personal condition, and which is always, and for all men, the object of supreme interest. Time, which is the relentless enemy of all that is partial and provisional, is the friend of Shakespeare, because it continually brings to the student of his work illustration and confirmation of its truth. There are many things in his plays which are more intelligible and significant to us than they were to the men who heard their musical cadence on the rude Elizabethan stage, because the ripening of experience has given the prophetic thought an historical demonstration; and there are truths in these plays which will be read with clearer eyes by the men of the next century than they are now read by us.

It is this prophetic quality in the books of power which silently moves them forward with the inaudible advance of the successive files in the ranks of the generations, and which makes them contemporary with each generation. For while the mediæval frame-work upon which Dante constructed the "Divine Comedy" becomes obsolete, the fundamental thought of the poet about human souls and the identity of the deed and its result not only remains true to experience but has received the most impressive confirmation from subsequent history and from psychology....