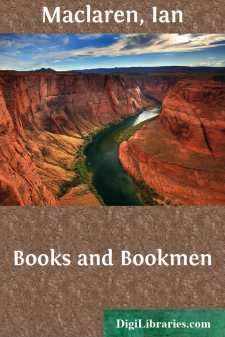 They cannot be separated any more than sheep and a shepherd, but I am minded to speak of the bookman rather than of his books, and so it will be best at the outset to define the tribe.

It does not follow that one is a bookman because he has many books, for he may be a book huckster or his books may be those without which a gentleman’s library is not complete.  And in the present imperfect arrangement of life one may be a bookman and yet have very few books, since he has not the wherewithal to purchase them.  It is the foolishness of his kind to desire a loved author in some becoming dress, and his fastidiousness to ignore a friend in a fourpence-halfpenny edition.  The bookman, like the poet, and a good many other people, is born and not made, and my grateful memory retains an illustration of the difference between a bookowner and a bookman which I think is apropos.  As he was to preside at a lecture I was delivering he had in his courtesy invited me to dinner, which was excellent, and as he proposed to take the rôle that night of a man who had been successful in business, but yet allowed himself in leisure moments to trifle with literature, he desired to create an atmosphere, and so he proposed with a certain imposing air that we should visit what he called “my library.”  Across the magnificence of the hall we went in stately procession, he first, with that kind of walk by which a surveyor of taxes could have at once assessed his income, and I, the humblest of the bookman tribe, following in the rear, trembling like a skiff in the wake of an ocean liner.  “There,” he said, with his thumbs in the armholes of his waistcoat, “what do you think of that?” And that was without question a very large and ornate and costly mahogany bookcase with glass doors.  Before I saw the doors I had no doubt about my host, but they were a seal upon my faith, for although a bookman is obliged to have one bit of glass in his garden for certain rare plants from Russia and Morocco, to say nothing of the gold and white vellum lily upon which the air must not be allowed to blow, especially when charged with gas and rich in dust, yet he hates this conservatory, just as much as he loves its contents.  His contentment is to have the flowers laid out in open beds, where he can pluck a blossom at will.  As often as one sees the books behind doors, and most of all when the doors are locked, then he knows that the owner is not their lover, who keeps tryst with them in the evening hours when the work of the day is done, but their jailer, who has bought them in the market-place for gold, and holds them in this foreign place by force.  It has seemed to me as if certain old friends looked out from their prison with appealing glance, and one has been tempted to break the glass and let, for instance, Elia go free.  It would be like the emancipation of a slave.  Elia was not, good luck for him, within this particular prison, and I was brought back from every temptation to break the laws of property by my chairman, who was still pursuing his catechism.  “What,” was question two, “do you think I paid for that?”  It was a hopeless catechism, for I had never possessed anything like that, and none of my friends had in their homes anything like that, and in my wildest moments I had never asked the price of such a thing as that.  As it loomed up before me in its speckless respectability and insolence of solid wealth my English sense of reverence for money awoke, and I confessed that this matter was too high for me; but even then, casting a glance of deprecation in its direction, I noticed that was almost filled by a single work, and I wondered what it could be.  “Cost £80 if it cost a penny, and I bought it second-hand in perfect condition for £17, 5s., with the books thrown in—All the Year Round from the beginning in half calf;” and then we returned in procession to the drawing-room, where my patron apologised for our absence, and explained that when two bookmen got together over books it was difficult to tear them away.  He was an admirable chairman, for he occupied no time with a review of literature in his address, and he slept without being noticed through mine (which is all I ask of a chairman), and so it may seem ungrateful, but in spite of “that” and any books, even Spenser and Chaucer, which that might have contained, this Mæcenas of an evening was not a bookman....