Bookbinding, and the Care of Books A handbook for Amateurs, Bookbinders & Librarians 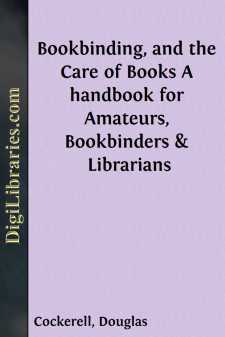 The reasons for binding the leaves of a book are to keep them together in their proper order, and to protect them. That bindings can be made, that will adequately protect books, can be seen from the large number of fifteenth and sixteenth century bindings now existing on books still in excellent condition. That bindings are made, that fail to protect books, may be seen by visiting any large library, when it will be found that many bindings have their boards loose and the leather crumbling to dust. Nearly all librarians complain, that they have to be continually rebinding books, and this not after four hundred, but after only five or ten years.

It is no exaggeration to say that ninety per cent. of the books bound in leather during the last thirty years will need rebinding during the next thirty. The immense expense involved must be a very serious drag on the usefulness of libraries; and as rebinding is always to some extent damaging to the leaves of a book, it is not only on account of the expense that the necessity for it is to be regretted.

The reasons that have led to the production in modern times of bindings that fail to last for a reasonable time, are twofold. The materials are badly selected or prepared, and the method of binding is faulty. Another factor in the decay of bindings, both old and new, is the bad conditions under which they are often kept.

The object of this text-book is to describe the best methods of bookbinding, and of keeping books when bound, taking into account the present-day conditions. No attempt has been made to describe all possible methods, but only such as appear to have answered best on old books. The methods described are for binding that can be done by hand with the aid of simple appliances. Large editions of books are now bound, or rather cased, at an almost incredible speed by the aid of machinery, but all work that needs personal care and thought on each book, is still done, and probably always will be done, by hand. Elaborate machinery can only be economically employed when very large numbers of books have to be turned out exactly alike.

The ordinary cloth “binding” of the trade, is better described as casing. The methods being different, it is convenient to distinguish between casing and binding. In binding, the slips are firmly attached to the boards before covering; in casing, the boards are covered separately, and afterwards glued on to the book. Very great efforts have been made in the decoration of cloth covers, and it is a pity that the methods of construction have not been equally considered. If cloth cases are to be looked upon as a temporary binding, then it seems a pity to waste so much trouble on their decoration; and if they are to be looked upon as permanent binding, it is a pity the construction is not better.

For books of only temporary interest, the usual cloth cases answer well enough; but for books expected to have permanent value, some change is desirable.