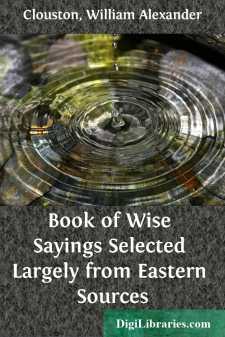 Cynics may ask, how many have profited by the innumerable proverbs and maxims of prudence which have been current in the world time out of mind? They will say that their only use is to repeat them after some unhappy wight has “gone wrong.” When, for instance, a man has played “ducks and drakes” with his money, the fact at once calls up the proverb which declares that “wilful waste leads to woful want”; but did not the “waster” know this well-worn saying from his early years downwards? What good, then, did it do him? Again, how many have been benefited by the saying of the ancient Greek poet, that “evil communications corrupt good manners”?—albeit they had it frequently before them in their school “copy-books.” Are the maxims of morality useless, then, because they are so much disregarded?

When a man has reached middle-age he generally feels with tenfold force the truth of those “sayings of the wise” which he learned in his early years, and has cause to regret, as well as wonder, that he had not all along followed their wholesome teaching. For it is to the young, who are about to cross the threshold of active life, that such terse convincing sentences are more especially addressed, and, spite of the proverbial heedlessness of youth, there will be found many who are not deaf to this kind of instruction, if their moral environment be favourable. But, even after the spring-time of youth is past, there are occasions when the mind is peculiarly susceptible to the force of a pithy maxim, which may tend to the reforming of one’s way of life. There is commonly more practical wisdom in a striking aphorism than in a round dozen of “goody” books—that is to say, books which are not good in the highest sense, because their themes are overlaid with commonplace and wearisome reflections.

May we not find the “whole duty of man” condensed into a few brief sentences, which have been expressed by thoughtful men in all ages and in countries far apart?—such as: “Love thy neighbour as thyself,” “Do unto others as ye would that they should do unto you.” The chief themes of all teachers of morality are: benevolence and beneficence; tolerance of the opinions of others; self-control; the acquisition of knowledge—that jewel beyond price; the true uses of wealth; the advantages of resolute, manly exertion; the dignity of labour; the futility of worldly pleasures; the fugacity of time; man’s individual insignificance. They are never weary of inculcating taciturnity in preference to loquacity, and the virtues of patience and resignation. They iterate and reiterate the fact that true happiness is to be found only in contentment; and they administer consolation and infuse hope by reminding us that as dark days are followed by bright days, so times of bitter adversity are followed by seasons of sweet prosperity; and thus, like the immortal Sir Hudibras, when “in doleful dumps”, we may “cheer ourselves with ends of verse, and sayings of philosophers.”

In the following small selection of aphorisms, a considerable proportion are drawn from Eastern literature. Indian wisdom is represented by passages from the great epics, the MahÄbhÄrata and the RÄmÄyana; the Panchatantra and the Hitopadesa, two Sanskrit versions of the famous collection of apologues known in Europe as the Fables of Bidpaï, or Pilpay; the Dharma-sastra of Manu; BhÄravi, MÄgha, Bhartrihari, and other Hindu poets. Specimens of the mild teachings of Buddha and his more notable followers are taken from the Dhammapada (Path of Virtue) and other canonical works; pregnant sayings of the Jewish Fathers, from the Talmud; Moslem moral philosophy is represented by extracts from Arabic and Persian writers (among the great poets of Persia are, FirdausÄ«, Sa’dÄ«, HÄfiz, NizÄmÄ«, Omar KhayyÄm, JÄmÄ«); while the proverbial wisdom of the Chinese and the didactic writings of the sages of Burmah are also occasionally cited.

The ordinary reader will probably be somewhat surprised to discover in the aphorisms of the ancient Greeks and Hindus several close parallels to the doctrines of the Old and New Testaments, and he will have reasoned justly if he conclude that the so-called “heathens” could have derived their spiritual light only from the same Source as that which inspired the Hebrew prophets and the Christian apostles....