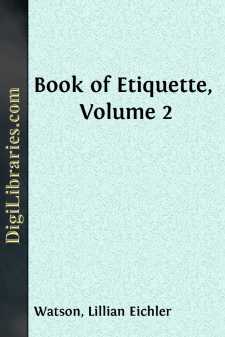 CHAPTER I SERVANTS THE SERVANT IN THE HOUSEHOLD

"A mouse can look at a king, but a king won't often look at a mouse" says the old proverb. Which is, sadly enough, the state of affairs between servants and mistresses in many households.

A great many people feel somehow that those who labor in the capacity of servants are inferior. But in most cases, it is those who place servants on a lower plane who are themselves inferior. We owe those who take a part in the household affairs of our homes, more than the wages we pay them. We owe them gratitude, courtesy, kindness. Many elaborate dinners would be failures if it were not for the silent members of our households. Many formal entertainments would be impossible without their help. They hold a certain place of importance in the home and it should be recognized in the social world as a place worthy of every courtesy and respect.

For those who are fortunate enough to have servants to help with domestic tasks, it is extremely important that the correct etiquette of servants be thoroughly known and understood. And those who serve as butlers and maids and valets must also know the little rules of good conduct that govern their duties and responsibilities. The information contained in the following paragraphs is meant for both the servant and the mistress, and we hope that both will find it valuable.

A WORD TO THE MISTRESS

In the home where guests are frequently entertained and where the hostess holds many formal social functions, servants are essential.

Every family that can afford to do so, should have one, or two, or more servants according to social requirements and the appointments of the house. They should be well instructed in their duties and they should be expected to carry them out faultlessly. Untidy, noisy, ill-trained servants reflect upon the manners and conduct of the mistress herself.

The most common method of engaging a servant is through an agency. Here different types of men and women can be found, and the mistress of the household may be fortunate enough to find one suited to her requirements. Sometimes she secures a maid or butler by the recommendation of some other housekeeper. This method is usually more satisfactory than any other because it puts things on a rather friendly basis from the start.

But whether the maid or butler be engaged by recommendation or through an agency, it is important that it be clearly understood from the beginning just what his or her duties will be. And the mistress should not engage a servant unless she feels sure that he will be able to fill the position satisfactorily, for it is both an expensive and provoking process to change servants frequently.

The first few days in a new home are always difficult for the servant. The mistress should be patient and considerate and do all she can to make the newcomer feel at ease in her new surroundings. Her directions should be requests, not commands, and she should overlook blunders for they may be the result of the servant's unfamiliarity with the household and its customs....