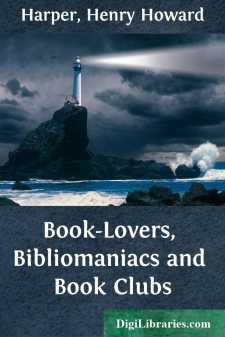 Book-collecting is undeniably one of the most engaging pursuits in which a refined and artistic taste may be indulged. From the earliest times, and even before the days of printing, this pleasant diversion has been pursued by persons of moderate means as well as by those of wealth and distinction, and every succeeding generation of book-collectors has exceeded its predecessors in numbers and in enthusiasm. The alluring influences of bibliophilism, or book-loving, have silently crept into thousands of homes, whether beautiful or humble; for the library is properly regarded as one of the most important features of home as well as mental equipment.

In The House Beautiful William C. Gannett emphasizes the importance of considering the library as foremost in furnishing a home. He says: "It means admission to the new marvels of science, if one chooses admission. It means an introduction to the noblest company that all the generations have produced, if we claim the introduction. Remembering this, how can one help wishing to furnish his house with some such furniture? A poet for a table piece! A philosopher upon the shelf! Browning or Emerson for a fireside friend!

"A family's rank in thought and taste can well be gauged by the books and papers that lie upon the shelf or table of the library."

Not many years ago, Mr. Howard Pyle said: "I sometimes think that we are upon the edge of some new era in which the art of beautifying books with pictures shall suddenly be uplifted into a higher and a different plane of excellence; when ornate printed colour and perfect reproduction shall truly depict the labour of the patient draughtsman who strives so earnestly to beautify the world in which he lives, and to lend a grace to the living therein." The prophecy is already fulfilled, and a modern book, in order to win favor among present-day bibliophiles, must embody an harmonious assimilation of many arts.

The ardor of possessing books, commonly called bibliomania, also styled bibliophilism and "biblio"—whatever else that has suggested itself to the fruitful imaginations of dozens of felicitous writers upon the subject,—is described by Dibdin as a "disease which grows with our growth, and strengthens with our strength." Kings and queens have not been immune from this prevalent though harmless malady. The vast resources of Henry VII were employed in collecting a library of which a modern millionaire collector might be justly proud. Many specimens of his magnificent collection, bearing the royal stamp, are now to be found in the British Museum. Queen Elizabeth and Lady Jane Grey were submissive victims of the bibliomania. It is worthy of note that while there were but few women book-collectors in the Elizabethan period, there are at the present time in our own country almost as many women as there are men engaged in this fascinating pursuit. As late as 1843, Dibdin remarks that "it is a remarkable circumstance, that the bibliomania has almost uniformly confined its attacks to the male sex, and among people in the higher and middling classes of society....