Bolshevism The Enemy of Political and Industrial Democracy 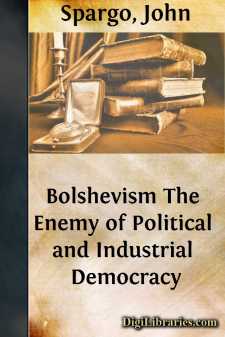 CHAPTER I THE HISTORICAL BACKGROUND I

For almost a full century Russia has been the theater of a great revolutionary movement. In the light of Russian history we read with cynical amusement that in 1848, when all Europe was in a revolutionary ferment, a German economist confidently predicted that revolutionary agitation could not live in the peculiar soil of Russian civilization. August Franz von Haxthausen was in many respects a competent and even a profound student of Russian politics, but he was wrong in his belief that the amount of rural communism existing in Russia, particularly the mir, would make it impossible for storms of revolutionary agitation to arise and stir the national life.

As a matter of historical fact, the ferment of revolution had appeared in the land of the Czars long before the German economist made his remarkably ill-judged forecast. At the end of the Napoleonic wars many young officers of the Russian army returned to their native land full of revolutionary ideas and ideals acquired in France, Italy, and Germany, and intent upon action. At first their intention was simply to make an appeal to Alexander I to grant self-government to Russia, which at one time he had seemed disposed to do. Soon they found themselves engaged in a secret conspiratory movement having for its object the overthrow of Czarism. The story of the failure of these romanticists, the manner in which the abortive attempt at revolution in December, 1825, was suppressed, and how the leaders were punished by Nicholas I—these things are well known to most students of Russian history. The Decembrists, as they came to be called, failed, as they were bound to do, but it would be a mistake to suppose that their efforts were altogether vain. On the contrary, their inspiration was felt throughout the next thirty years and was reflected in the literature of the period. During that period Russian literature was tinged with the faith in social regeneration held by most of the cultured intellectual classes. The Decembrists were the spiritual progenitors of the Russian revolutionary movement of our time. In the writings of Pushkin—himself a Decembrist—Lermontoff, Gogol, Turgeniev, Dostoyevsky, and many others less well known, the influence of the Decembrist movement is clearly manifested.

If we are to select a single figure as the founder of the modern social revolutionary movement in Russia, that title can be applied to Alexander Herzen with greater fitness than to any other. His influence upon the movement during many years was enormous. Herzen was half-German, his mother being German. He was born at Moscow in 1812, shortly before the French occupation of the city. His parents were very rich and he enjoyed the advantages of a splendid education, as well as great luxury. At twenty-two years of age he was banished to a small town in the Urals, where he spent six years, returning to Moscow in 1840. It is noteworthy that the offense for which he had been sent into exile was the singing of songs in praise of the Decembrist martyrs. This occurred at a meeting of one of the "Students' Circles" founded by Herzen for the dissemination of revolutionary Socialist ideals among the students.

Upon his return to Moscow in 1840 Herzen, together with Bakunin and other friends, again engaged in revolutionary propaganda and in 1842 he was again exiled. In 1847, through the influence of powerful friends, he received permission to leave Russia for travel abroad. He never again saw his native land, all the remaining years of life being spent in exile. After a tour of Italy, Herzen arrived in Paris on the eve of the Revolution of 1848, joining there his friends, Bakunin and Turgeniev, and many other revolutionary leaders. It was impossible for him to participate actively in the 1848 uprising, owing to the activity of the Paris police, but he watched the Revolution with the profoundest sympathy. And when it failed and was followed by the terrible reaction his distress was almost unbounded. For a brief period he was the victim of the most appalling pessimism, but after a time his faith returned and he joined with Proudhon in issuing a radical revolutionary paper, L'Ami du Peuple, of which, Kropotkin tells us in his admirable study of Russian literature, "almost every number was confiscated by the police of Napoleon the Third." The paper had a very brief life, and Herzen himself was soon expelled from France, going to Switzerland, of which country he became a citizen....