Bolshevism: A Curse & Danger to the Workers 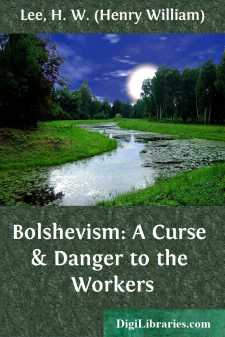 FOREWORD BY WILL THORNE, M.P.

I have been asked to write a brief introduction to the pamphlet which my old friend and comrade H.W. Lee has written on the undercurrent of Bolshevist propaganda going on in this country, of which the recent unauthorised strike outbreaks are outward and visible signs. I do this gladly. Our comrade Lee, through being long associated with the Social-Democratic Federation as its Secretary, and his editorship of "Justice" during the last five years, has gained a knowledge of International Socialist movements in their many phases which renders his pamphlet both authoritative and reliable.

I hope the pamphlet will have a wide circulation in all the large industrial centres, because I feel convinced that the majority of the rank and file of the wage-earners do not and cannot know what it is that our Bolshevists are striving for. They have not the faintest idea in what direction some of them are being led. The Bolshevists in certain industrial centres want to impose their own authority on the rank and file of the workers, using catch-words for that purpose. If they succeed in this direction they will set to work to undermine the trade union movement of this country, and upset, instead of making use of, the means we at present possess for improving our economic conditions.

Our minds go back to the Leeds "Convention," held in June, 1917. The delegates at that Conference declared that they were in favour of Workmen's and Soldiers' Councils being formed in all the large industrial centres of the country. Nothing whatever came of it. But the W.S.C.s then controlling the revolutionary undercurrent in Russia were totally different from the Bolshevist tyranny of to-day, and many of the delegates who formed the W.S.C.s in various parts of Russia after the Revolution have been imprisoned or shot because they opposed the domination of Lenin and Trotzky.

Last Tuesday I saw two friends whom I met in Petrograd in April, 1917, and both of them absolutely confirm the statements made in the Press about the hundreds of men and women who have been shot without any trial or confirmation of the charges brought against them.

An article which appears in the "Nineteenth Century" of January, written by Mr. Pierson, who was imprisoned in the Fortress of St. Peter and St. Paul last October, after being arrested at the British Embassy in Petrograd at the same time that Captain Cromie was shot, also confirms the brutalities that are taking place constantly in Petrograd and other parts of Russia.

A letter in the "Daily Express," written by Colonel John Ward, M.P., shows the terrible hell which Bolshevism is making, and the methods that are being pursued by the followers of Lenin and Trotzky. If the Soldiers' and Workmen's Councils had done their duty in the latter part of April, 1917, after Lenin made his two hours' speech in the Duma on April 17, they would have sent him back whence he came, because it is a well-known fact that he was allowed to pass through Germany with thirty other companions in a first-class saloon....