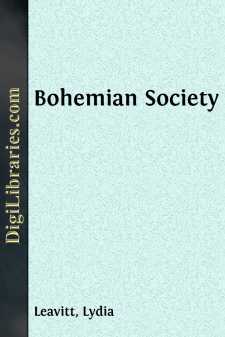 BOHEMIAN SOCIETY. "She was not fair, Nor beautiful,—those words express her not, But, O, her looks had something excellent That wants a name."

In a country house near the city of B—— lived a lady of cultivated mind and manners, "a noble woman nobly planned." Well read and familiar with such writers as Tyndall, Huxley, Spencer and other scientists, and being rather cosmopolitan in tastes, liked to gather about her, people who had—as she termed it—ideas. At times there was a strange medley of artists, authors, religious enthusiasts, spiritualists, philanthropists and even philosophers. On the evening of which I write there was the usual peculiar gathering, and each one is expressing his or her views freely and unrestrainedly.

The visionary and dreamer said: "Let me describe a modern Utopia of which I have often dreamed and thought.

In a fertile valley, surrounded on all sides by high mountains, lived a community or body of people who had never been outside the valley. To them the mountains proved an impassible barrier and they had no wish or desire to penetrate beyond. For generations they had lived in this peaceful retreat happy and content. The ground yielded sufficient for their wants and needs. No one in this little world was richer than his neighbor and if one of the community fell ill each contributed something from their own supply for his or her support. They knew nothing about the value of money, for here it was useless. No one dreamed of possessing more than his neighbor, but each and all must share alike. Time dealt kindly with these simple people, for they dealt kindly with time, and life flowed on smoothly and pleasantly. Men and women of seventy years were hale and hearty, for it is not so much the number of years we live that leave their traces, as the events which transpire in those years; each event, each sorrow, each disappointment making an era and each one leaving a trace. For the inhabitants of the valley there were few disappointments and fewer sorrows. If the angel of death entered and took one of their number, each and all took the sorrow home for it was looked upon as a personal calamity when any one of the little community was taken from them.

The sun seemed to shine brighter, the water to be clearer and more limpid, the foliage more brilliant in this little world than elsewhere. Perhaps because the eyes of the people were undimmed by sorrow, perhaps because their souls were unclouded by sin, or perchance they were in complete harmony with nature and were able to see all her beauty, each charm enhanced by something within themselves.

Nowhere else did the earth yield such abundant harvest. The wheat bent its yellow head from over weight. The trees were laden with fruit and here again nature seemed to be in sympathy with her children. No sordid motives, no love of gain, no thought of barter and sale entered their minds while sowing their fields or reaping their grain, but every one labored that each and all might be benefitted. The men were strong and self-reliant, the women contented and happy, the children rosy and healthy.

Every Sabbath morning the old church bell rang a sweet summons to meet together to worship God. One church was sufficient for all. They knew nothing about heresies and schisms but assembled together to hear a simple story simply told. The venerable clergyman, with white hair and beard, in the dimly lighted church resembled the pictures of the martyrs, his face telling the story of a simple, true, pure life. His sermons were eloquent from their very simplicity; no need there of learned dissertations, for the people would not have comprehended had he been able to give them, and had they been able to understand, their pastor was unable to teach. It was a pleasant sight, the old men, young maidens, happy matrons and rosy children assembled together in their quaint old fashioned dress, simple in the extreme, listening to the teaching of their minister.

Their amusement and pleasures were simple with no unnatural craving after excitement....