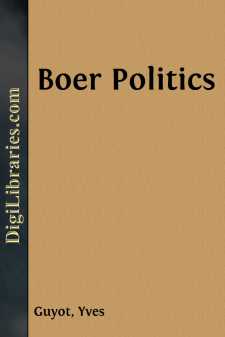 A word in explanation of this English edition is perhaps not unnecessary.

It will be remembered that the arguments in the following pages appeared originally in the columns of Le Siècle, and from the correspondence between M. Yves Guyot and Dr. Kuyper and M. Brunetière (Appendix B), the reader will understand how the publication of Le Siècle articles in pamphlet form arose.

In the month of May when M. Yves Guyot's La Politique Boer made its appearance, the supply of literature by more or less competent judges on South African affairs was already so formidable in this country, that an English publication of his pamphlet was apparently not wanted. Moreover, as my master's arguments were written for readers on the continent and not for those of Great Britain, such a publication was not thought of at the time.

Of the first editions of La Politique Boer placed before the reading public in various countries, a few thousand copies were sent to London. The demand, however, exceeded the supply to such a large extent, and so many letters were received at this office from British readers (unfamiliar with the French language) asking for a translation, that an English dress of La Politique Boer was decided upon.

As the translation was proceeding various incidents of importance in connection with the South African crisis took place. These were commented upon by M. Yves Guyot in Le Siècle and added to the existing pamphlet; the English edition is consequently more up-to-date than the original.

Our thanks for valuable assistance given in the translation are largely due to Mrs. Ellen Waugh and Mr. Charles Baxter.

M. Yves Guyot has renounced his author's rights, and the profits to Le Siècle, resulting from this publication, will be handed in two equal shares to the societies here and in South Africa which represent the interests of the widows and orphans of English and Boer combatants who have given their lives for their countries.

CONTENTS. PAGE Preface. 1. State of the Question.—2. Pro-Boer Argument, and the Jameson Raid.—3. Profits of the Jameson Raid.—4. Logical Consequences of the Jameson Raid . Chapter I. Boer Apologists. 1. Disregard of Facts, and Subordination to the Vatican.—2. The Boers, the Natives and Slavery.—3. "Essentially a Man of War and Politics" Chapter II. English and Boers. 1. The ideal of the Boers.—2. The English in South Africa.—3. "The Crime."—4. British Sphere of Influence in 1838.—5. England, the Transvaal and the Orange Free State Chapter III. The Annexation of the Transvaal and the Conventions of 1881 and 1884. 1. The "Gold Mines" Argument.—2. Boer Anarchy.—3. The Boers saved by the English.—4.—The Annexation of the Transvaal, and the Conventions of 1881 and 1884.—5. The Convention of 1881 inapplicable.—6. Violation by the Boers Chapter IV. Articles of the Convention of 1884. 1. Krüger's point of view.—2....
Show more
Show less