Bobby of the Labrador 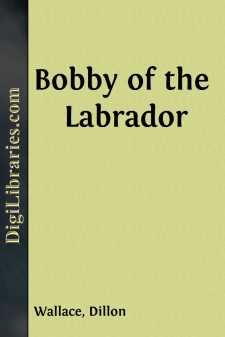 THE BOAT THAT CAME DOWN FROM THE SEA

Abel Zachariah was jigging cod. Cod were plentiful, and Abel Zachariah was happy. It still lacked two hours of mid-day, and already he had caught a skiffload of fish and had landed them on Itigailit Island, where his tent was pitched.

Now, as he jigged a little off shore, he could see Mrs. Abel Zachariah, the yellow sunshine spread all about her, splitting his morning catch on a rude table at the foot of the sloping rocks. Above her stood the little tent that was their summer home, and here and there the big sledge dogs, now idle and lazy and fat, sprawled blissfully upon the rocks enjoying the August morning, for this was their season of rest and plenty.

With a feeling of deep content Abel drew in his line, unhooked a flapping cod, returned the jigger to the water, and, as he resumed the monotonous tightening and slackening of line, turned his eyes again to the peaceful scene ashore.

Mrs. Abel in this brief interval had left the splitting table and had ascended the sloping rock a little way, where she now stood, shading her eyes with her right hand and gazing intently seaward. Suddenly she began gesticulating wildly, and shouting, and over the water to Abel came the words:

Abel arose deliberately in his skiff, and looking in the direction in which Mrs. Abel pointed discovered, coming out of the horizon, a boat, rising and falling upon the swell. It carried no sail, and after careful scrutiny Abel's sharp eyes could discern no man at the oars. This, then, was the cause of Mrs. Abel's excitement. The boat was unmanned—a derelict upon the broad Atlantic.

A drifting boat is fair booty on the Labrador coast. It is the recognized property of the man who sees it and boards it first. And should it be a trap boat he is indeed a fortunate man, for the value of a trap boat is often greater than a whole season's catch of fish.

So Abel lost no time in hauling in and coiling his jigger line, in adjusting his oars, and in pulling away toward the derelict with all the strength his strong arms and sinewy body could muster.

Abel had wished for a good sea boat all his life. When the fishing schooners now and again of a foggy night anchored behind Itigailit Island he never failed to examine the fine big trap boats which they carried. Sometimes he had ventured to inquire how much salt fish they would accept in exchange for one. But he had never had enough fish, and his desire to possess a boat seemed little less likely of fulfilment than that of a boy with a dime in his pocket, covetously contemplating a gold watch in the shop window.

But here, at last, drifting directly toward him, as though Old Ocean meant it as a gift, propelled by a gentle breeze and an incoming tide, came a boat that would cost him nothing but the getting. Fortune was smiling upon Abel Zachariah this fine August morning.

Now and again as he approached the derelict, Abel rested upon his oars, that he might turn about for a moment and feast his eyes upon his prospective prize, and revel in the pleasure of anticipation about to be realized....