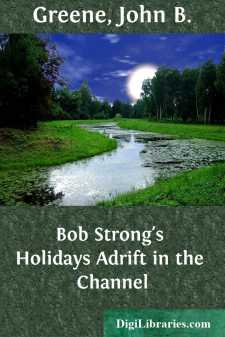 The noise of the train, however, drowned Nellie’s voice; besides which Master Bob was further prevented from hearing this appeal to him by reason of his head and shoulders being at that precise instant projected out of the window of the railway-carriage, in utter defiance of the Company’s bye-laws to the contrary and of his sister’s solicitous entreaties to the same effect—poor Nellie, fearing, in her feminine anxiety, that the door would fly open unexpectedly, from the pressure of Bob’s person, and precipitate her brother as suddenly out on the line.

“Bob!” she therefore repeated on finding her first summons disregarded, speaking in a louder key and giving a tug to his jacket the better to attract his attention—“I say, Bob!”

“Hullo! What’s the row?” shouted back the delinquent, hearing her at last, and wriggling himself in from the window like a snail withdrawing itself into its shell, turning round the while his face, slightly flushed with the exertion, to hers—“Anything wrong, eh?”

Little Miss Nellie had not expected her timid and tentative conversational advances to be taken up in this downright fashion. Really she was only anxious for some one to sympathise with her and talk about the various objects of interest which came across her notice as they went along; so, Bob’s abrupt address, coupled with his gruff tone of voice, fell on her enthusiasm like a wet blanket!

“Nothing’s the matter,” she replied timidly. “I only wanted to say how nice it is travelling like this.”

“You don’t mean to say you only called me in to tell me that?” said Bob, almost angrily. “I do think girls are the greatest geese in the world!”

With this dogmatic assertion, Master Bob shoved himself head and shoulders out of the window again, utterly ignoring poor Nellie’s existence, much to her chagrin and dismay.

He was very rude, it must be confessed; but, some allowance should be made for him, all things considered.

In the first place, he was a boy just fresh from the rougher associations of school life; and, secondly, his inquiring mind was intently occupied in endeavouring to solve a series of mathematical problems that set all Euclid’s laws at defiance, as the train whizzed on its way with a ‘piff-paff! pant-pant!’ of the great Juggernaut engine, the carriages rattling and jolting as they were dragged along at the tail of the mighty steam demon, swaying to and fro with a rhythmical movement of the wheels, in measured cadence of spondees and dactyls, as if singing to themselves the song of “the Iron Road.”

Strange to say, this was a song of which, Bob noticed, the involuntary musicians never completed the second bar.

They re-commenced all over again from the beginning, when they reached some particularly crucial point, where the ‘click’ or the ‘clack’ of the ever-echoing ‘click-clacking’ chorus proved too much for their overworked axles!

Bob, though, was not thinking of this music of the rail, or paying any attention to it, albeit it was distinct and plain to him; as, indeed, it is to all with ears attuned in harmony with this mystery of motion, and who choose to listen to it, just as there are ‘sermons in stones,’ for those who care to read them...!