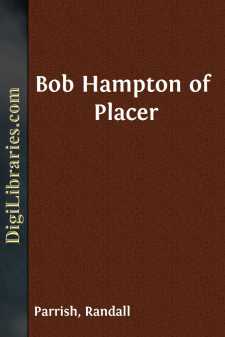 CHAPTER I HAMPTON, OF PLACER

It was not an uncommon tragedy of the West. If slightest chronicle of it survive, it must be discovered among the musty and nearly forgotten records of the Eighteenth Regiment of Infantry, yet it is extremely probable that even there the details were never written down. Sufficient if, following certain names on that long regimental roll, there should be duly entered those cabalistic symbols signifying to the initiated, "Killed in action." After all, that tells the story. In those old-time Indian days of continuous foray and skirmish such brief returns, concise and unheroic, were commonplace enough.

Yet the tale is worth telling now, when such days are past and gone. There were sixteen of them when, like so many hunted rabbits, they were first securely trapped among the frowning rocks, and forced relentlessly backward from off the narrow trail until the precipitous canyon walls finally halted their disorganized flight, and from sheer necessity compelled a rally in hopeless battle. Sixteen,—ten infantrymen from old Fort Bethune, under command of Syd. Wyman, a gray-headed sergeant of thirty years' continuous service in the regulars, two cow-punchers from the "X L" ranch, a stranger who had joined them uninvited at the ford over the Bear Water, together with old Gillis the post-trader, and his silent chit of a girl.

Sixteen—but that was three days before, and in the meanwhile not a few of those speeding Sioux bullets had found softer billet than the limestone rocks. Six of the soldiers, four already dead, two dying, lay outstretched in ghastly silence where they fell. "Red" Watt, of the "X L," would no more ride the range across the sun-kissed prairie, while the stern old sergeant, still grim of jaw but growing dim of eye, bore his right arm in a rudely improvised sling made from a cartridge-belt, and crept about sorely racked with pain, dragging a shattered limb behind him. Then the taciturn Gillis gave sudden utterance to a sobbing cry, and a burst of red spurted across his white beard as he reeled backward, knocking the girl prostrate when he fell. Eight remained, one helpless, one a mere lass of fifteen. It was the morning of the third day.

The beginning of the affair had burst upon them so suddenly that no two in that stricken company would have told the same tale. None among them had anticipated trouble; there were no rumors of Indian war along the border, while every recognized hostile within the territory had been duly reported as north of the Bear Water; not the vaguest complaint had drifted into military headquarters for a month or more. In all the fancied security of unquestioned peace these chance travellers had slowly toiled along the steep trail leading toward the foothills, beneath the hot rays of the afternoon sun, their thoughts afar, their steps lagging and careless. Gillis and the girl, as well as the two cattle-herders, were on horseback; the remainder soberly trudged forward on foot, with guns slung to their shoulders....