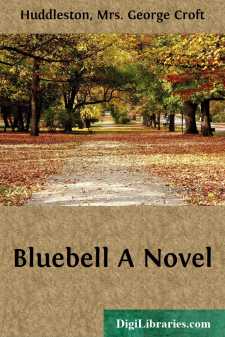 SWEET SEVENTEEN. I see her now—the vision fair,Of candour, innocence, and truth,Stand tiptoe on the verge of air,'Twixt childhood and unstable youth.

It was the "fall" in Canada, and the leaves were dying royally in purple, crimson and gold. On the edge of a common, skirting a well-known city of Ontario, stood a small, rough-cast cottage, behind which the sun was setting with a red promise of frost, his flaming tints repeated in the fervid hue of the Virginian creeper that clothed it.

This modest tenement was the retreat of three unprotected females, two of whom were seated in silent occupation close to a black stove, which imparted heat, but denied cheerfulness. The elder was grey and tintless as her life,—harsh wisdom wrung from sad experience ever on lips thin and tight, as though from habitually repressing every desire. The younger, a widow, was scarcely passed middle age, small of stature, but wizened beyond her years by privation and sorrow.

A smell of coal-oil, that most unbearable of odours, pervaded the interior of the cottage, revealing that the general servant below in lighting the lamp had, as usual, upset some, and was retaining the aroma by smearing it off with her apron.

Presently a quick, light step tripped over the wooden side-walk, a shadow darkened the window, and a vision of youth and freshness burst into the dingy little parlour.

A rather tall, full-formed young Hebe was Theodora Leigh, of that pure pink and white complexion that goes farther to make a beauty than even regularity of feature; her long, sleepy eyes were just the shade of the wild hyacinth; indeed, her English father always called her "Bluebell," after a flower that does not grow on Transatlantic soil.

But they were Irish-eyes, "put in with a dirty finger," and varying with every mood. Gooseberry eyes may disguise more soul, but they get no credit for it. Humour seemed to dance in that soft, blue fire; poetry dreamed in their clear depths; love—but that we have not come to yet; they were more eloquent than her tongue, for she was neither witty nor wise, only rich in the exuberant life of seventeen, and as expectant of good will and innocent of knowledge of the world as a retriever puppy.

Apparently, Miss Bluebell was not in the suavest of humours, for she flung her hat on to one crazy chair, and herself on another, with a vehemence that caused a sensible concussion.

"My dear, how brusque you are," said Mrs. Leigh, plaintively.

"What's gone wrong with the child now?" said Miss Opie, the elder proprietress of the domicile.

"Why," said Bluebell, "I met the Rollestons, and they asked: me to their picnic at the Humber on Friday; but how can I go? Look here!" and she pointed to a pair of boots evidently requiring patching. "Oh, mother! could you manage another pair now? Miss Scrag has sent home my new 'waist,' and I can do up my hat, but these buckets are only fit for the dusthole."