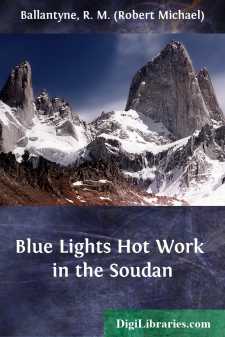 There is a dividing ridge in the great northern wilderness of America, whereon lies a lakelet of not more than twenty yards in diameter. It is of crystal clearness and profound depth, and on the still evenings of the Indian summer its surface forms a perfect mirror, which might serve as a toilet-glass for a Redskin princess.

We have stood by the side of that lakelet and failed to note the slightest symptom of motion in it, yet somewhere in its centre there was going on a constant and mysterious division of watery particles, and those of them which glided imperceptibly to the right flowed southward to the Atlantic, while those that trembled to the left found a resting-place by the frozen shores of Hudson’s Bay.

As it is with the flow and final exit of those waters, so is it, sometimes, if not always, with the spirit and destiny of man.

Miles Milton, our hero, at the age of nineteen, stood at the dividing ridge of his life. If the oscillating spirit, trembling between right and wrong, had decided to lean to the right, what might have been his fate no one can tell. He paused on the balance a short time, then he leaned over to the left, and what his fate was it is the purpose of this volume to disclose. At the outset, we may remark that it was not unmixed good. Neither was it unmitigated evil.

Miles had a strong body, a strong will, and a somewhat passionate temper: a compound which is closely allied to dynamite!

His father, unfortunately, was composed of much the same materials. The consequences were sometimes explosive. It might have profited the son much had he studied the Scripture lesson, “Children, obey your parents in the Lord.” Not less might it have benefited the father to have pondered the words, “Fathers, provoke not your children to wrath.”

Young Milton had set his heart on going into the army. Old Milton had resolved to thwart the desire of his son. The mother Milton, a meek and loving soul, experienced some hard times between the two. Both loved her intensely, and each loved himself, not better perhaps, but too much!

It is a sad task to have to recount the disputes between a father and a son. We shrink from it and turn away. Suffice it to say that one day Miles and his father had a Vesuvian meeting on the subject of the army. The son became petulant and unreasonable; the father fierce and tyrannical. The end was that they parted in anger.

“Go, sir,” cried the father sternly; “when you are in a better frame of mind you may return.”

“Yes, father, I will go,” cried the son, starting up, “and I will never return.”

Poor youth! He was both right and wrong in this prophetic speech. He did return home, but he did not return to his father.

With fevered pulse and throbbing heart he rushed into a plantation that lay at the back of his father’s house. He had no definite intention save to relieve his feelings by violent action. Running at full speed, he came suddenly to a disused quarry that was full of water. It had long been a familiar haunt as a bathing-pool....