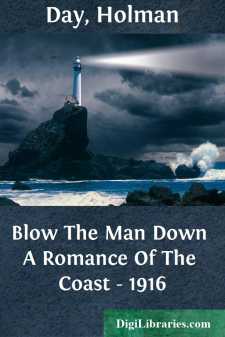 I ~ CAPTAIN BOYD MAYO GETS OUT OF SOUNDINGS When in safety or in doubt,Always keep a safe lookout;Strive to keep a level head,Mind your lights and mind your lead.—Pilot-house Ditty.

For days he had been afraid of that incredible madness of his as a man fears a nameless monster. But he was sure of his strength even while admitting his weakness. He was confident that he had the thing securely in leash.

Then all at once it happened!

Without preface of word or look he whirled and faced her, swept her into his arms and kissed her. He did not attempt to absolve himself or mitigate his offense by telling her that he loved her. He was voiceless—he could not control his speech. He did not dare to show such presumption as talk of love must seem to be to her. He knew he must not speak of love; such proffer to her would be lunacy. But this greater presumption, this blind capture of her in his arms—this was something which he had not intended any more than a sane man considers flight to the moon.

He did not understand; he had been himself—then, instantly, in time measured by a finger-snap, he had become this wretch who seemed to be somebody else.

He had ceased, for an insane moment, to be master of all his senses. But he released her as suddenly as he had seized her, and staggered to the door of the chart-room, turning his back on her and groaning in supreme misery.

In that moment of delirium he had insulted his own New England sense of decency and honor.

He was afraid to look back at her. With an agony of apprehension he dreaded the sound of her voice. He knew well enough that she was striving to get command of herself, to recover from her utter amazement. He waited. The outrage must have incensed her beyond measure; the silence was prolonged.

In the yacht's saloon below a violin sang its very soul out upon the summer night, weaving its plaint into the soft, adagio rippling of a piano's chords.

He searched his soul. The music, that distant, mellow phrasing of the call of love, the music had unstrung him. While he paced the bridge before her coming that music had been melting the ice of his natural reserve. But he did not pardon himself because he had acted the fool.

He stared at the night framed in the door of the chart-house. Little waves were racing toward him, straight from the moon, on the sea-line, like a flood of new silver pouring from the open door of plenty!

But the appealing beauty of that night could not excuse the unconscionable insult he had just offered her. He knew it, and shivered.

She had come and leaned close to him over the outspread chart, her breath on his cheek—so close to him that a roving tress of her hair flicked him. But because a sudden fire had leaped from the touch to his brain was no reason for the act by which he had just damned himself as a presumptuous brute.

For he, Boyd Mayo, captain of her father's yacht, a hireling, had just paid the same insulting courtship to Alma Marston that a sailor would proffer to an ogling girl on the street.