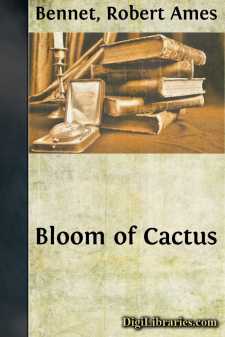 As Lennon drove his heavily packed burro over the round of the ridge above the camp spring, all the desolate Arizona waste around him was transformed by the splendour of dawn. Up out of mysterious velvety blue-black valleys loomed the massive purple-walled fortresses and cities of the mountain giants, guarded by titanic skyward towering pyramids and turrets of exquisite rose pink.

The burro was not interested in scenery or light effects. He topped the ridge and plodded slowly down the steep trail on the far side. Lennon lingered to enjoy the glorious illusion of the view.

All too soon, as the glaring sun cleared the high plateau on the eastern horizon, the ethereal colours of daybreak faded. The magic towers and pyramids lowered and shrank in bulk until they became only bald rugged peaks and buttes.

No less remorselessly the flood of hot white sunrays burned away the shadow tapestry of the valleys. In place of the cool mysterious vales there were left only scorched gulleys and dry washes sparsely set with greasewood and sagebrush and cactus.

Yet the interest in Lennon's alert gray eyes increased rather than lessened as he swung away down slope after his burro. The trail he was following was very old. Above almost every arable valley bottom the heights were crested with the stone ruins of ancient pueblos. Not improbably, Coronado or others of the early Spanish explorers had ridden this trail, west and north around the great bend, into the territory of the Moquis and Navahos.

Within the memory of settlers not yet white-haired, more than one war-party of renegade Apaches had sneaked along the ancient way in search of victims. Every few yards of the bad lands offered perfect lurking places for liers-in-wait along the trail.

Lennon glanced at the butt of his rifle in its sheath on the burro's pack. He recalled the tales of the old prospector whose copper mine he was seeking to rediscover. But his glance was only momentary. He knew that twenty-seven years had passed since the last murderous Indian outbreak in this land of desolation.

In those days a lone prospector would never have thought of tramping this trail without his rifle ready in hand, and the hammer at half cock. Lennon began to whistle a dance tune as he sauntered unconcernedly at the heels of his slow-moving burro up a rise and along a badly broken rocky slope.

They came down into a sandy wash that curved out of the mass of jagged ridges on the north. When midway across the bottom of the arroyo Lennon heard a sharp ping close above his ear—his sombrero whirled from his head. Before the hat struck the sand the rocky sides of the wash reverberated with the report of a rifle shot.

Lennon had never before been under fire, yet his reaction to the shot was almost instantaneous. One jump brought him alongside the burro. He crouched below the level of the pack and clutched the butt of his sheathed rifle. Again the gulley walls reverberated. The burro dropped dead, with a bullet through his head....