Blazed Trail Stories and Stories of the Wild Life 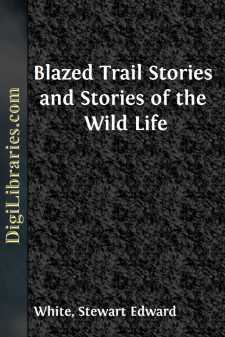 I first met him one Fourth of July afternoon in the middle eighties. The sawdust streets and high board sidewalks of the lumber town were filled to the brim with people. The permanent population, dressed in the stiffness of its Sunday best, escorted gingham wives or sweethearts; a dozen outsiders like myself tried not to be too conspicuous in a city smartness; but the great multitude was composed of the men of the woods. I sat, chair-tilted by the hotel, watching them pass. Their heavy woollen shirts crossed by the broad suspenders, the red of their sashes or leather shine of their belts, their short kersey trousers "stagged" off to leave a gap between the knee and the heavily spiked "cork boots"—all these were distinctive enough of their class, but most interesting to me were the eyes that peered from beneath their little round hats tilted rakishly askew. They were all subtly alike, those eyes. Some were black, some were brown, or gray, or blue, but all were steady and unabashed, all looked straight at you with a strange humorous blending of aggression and respect for your own business, and all without exception wrinkled at the corners with a suggestion of dry humor. In my half-conscious scrutiny I probably stared harder than I knew, for all at once a laughing pair of the blue eyes suddenly met mine full, and an ironical voice drawled,

"Say, bub, you look as interested as a man killing snakes. Am I your long-lost friend?"

The tone of the voice matched accurately the attitude of the man, and that was quite non-committal. He stood cheerfully ready to meet the emergency. If I sought trouble, it was here to my hand; or if I needed help he was willing to offer it.

"I guess you are," I replied, "if you can tell me what all this outfit's headed for."

He thrust back his hat and ran his hand through a mop of closely cropped light curls.

I joined him, and together we followed the crowd to the river, where we roosted like cormorants on adjacent piles overlooking a patch of clear water among the filled booms.

"Drive's just over," my new friend informed me. "Rear come down last night. Fourther July celebration. This little town will scratch fer th' tall timber along about midnight when the boys goes in to take her apart."

A half-dozen men with peavies rolled a white-pine log of about a foot and a half diameter into the clear water, where it lay rocking back and forth, three or four feet from the boom piles. Suddenly a man ran the length of the boom, leaped easily into the air, and landed with both feet square on one end of the floating log. That end disappeared in an ankle-deep swirl of white foam, the other rose suddenly, the whole timber, projected forward by the shock, drove headlong to the middle of the little pond. And the man, his arms folded, his knees just bent in the graceful nervous attitude of the circus-rider, stood upright like a statue of bronze.

A roar approved this feat.