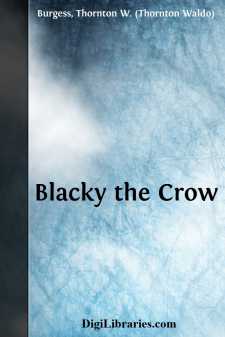 CHAPTER I: Blacky The Crow Makes A Discovery

Blacky the Crow is always watching for things not intended for his sharp eyes. The result is that he gets into no end of trouble which he could avoid. In this respect he is just like his cousin, Sammy Jay. Between them they see a great deal with which they have no business and which it would be better for them not to see.

Now Blacky the Crow finds it no easy matter to pick up a living when snow covers the Green Meadows and the Green Forest, and ice binds the Big River and the Smiling Pool. He has to use his sharp eyes for all they are worth in order to find enough to fill his stomach, and he will eat anything in the way of food that he can swallow. Often he travels long distances looking for food, but at night he always comes back to the same place in the Green Forest, to sleep in company with others of his family.

Blacky dearly loves company, particularly at night, and about the time jolly, round, red Mr. Sun is beginning to think about his bed behind the Purple Hills, you will find Blacky heading for a certain part of the Green Forest where he knows he will have neighbors of his own kind. Peter Rabbit says that it is because Blacky's conscience troubles him so that he doesn't dare sleep alone, but Happy Jack Squirrel says that Blacky hasn't any conscience. You can believe just which you please, though I suspect that neither of them really knows.

As I have said, Blacky is quite a traveler at this time of year, and sometimes his search for food takes him to out-of-the-way places. One day toward the very last of winter, the notion entered his black head that he would have a look in a certain lonesome corner of the Green Forest where once upon a time Redtail the Hawk had lived. Blacky knew well enough that Redtail wasn't there now; he had gone south in the fell and wouldn't be back until he was sure that Mistress Spring had arrived on the Green Meadows and in the Green Forest.

Like the black imp he is, Blacky flew over the tree-tops, his sharp eyes watching for something interesting below. Presently he saw ahead of him the old nest of Red-tail. He knew all about that nest. He had visited it before when Red-tail was away. Still it might be worth another visit. You never can tell what you may find in old houses. Now, of course, Blacky knew perfectly well that Redtail was miles and miles, hundreds of miles away, and so there was nothing to fear from him. But Blacky learned ever so long ago that there is nothing like making sure that there is no danger. So, instead of flying straight to that old nest, he first flew over the tree so that he could look down into it.

Right away he saw something that made him gasp and blink his eyes. It was quite large and white, and it looked—it looked very much indeed like an egg! Do you wonder that Blacky gasped and blinked? Here was snow on the ground, and Rough Brother North Wind and Jack Frost had given no hint that they were even thinking of going back to the Far North. The idea of any one laying an egg at this time of year!...