Black Spirits and White A Book of Ghost Stories 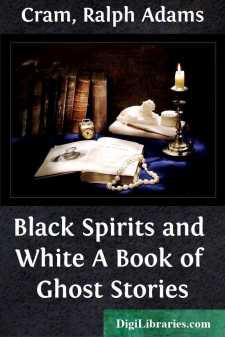 When in May, 1886, I found myself at last in Paris, I naturally determined to throw myself on the charity of an old chum of mine, Eugene Marie d'Ardeche, who had forsaken Boston a year or more ago on receiving word of the death of an aunt who had left him such property as she possessed. I fancy this windfall surprised him not a little, for the relations between the aunt and nephew had never been cordial, judging from Eugene's remarks touching the lady, who was, it seems, a more or less wicked and witch-like old person, with a penchant for black magic, at least such was the common report.

Why she should leave all her property to d'Ardeche, no one could tell, unless it was that she felt his rather hobbledehoy tendencies towards Buddhism and occultism might some day lead him to her own unhallowed height of questionable illumination. To be sure d'Ardeche reviled her as a bad old woman, being himself in that state of enthusiastic exaltation which sometimes accompanies a boyish fancy for occultism; but in spite of his distant and repellent attitude, Mlle. Blaye de Tartas made him her sole heir, to the violent wrath of a questionable old party known to infamy as the Sar Torrevieja, the "King of the Sorcerers." This malevolent old portent, whose gray and crafty face was often seen in the Rue M. le Prince during the life of Mlle. de Tartas had, it seems, fully expected to enjoy her small wealth after her death; and when it appeared that she had left him only the contents of the gloomy old house in the Quartier Latin, giving the house itself and all else of which she died possessed to her nephew in America, the Sar proceeded to remove everything from the place, and then to curse it elaborately and comprehensively, together with all those who should ever dwell therein.

This final episode was the last word I received from Eugene, but I knew the number of the house, 252 Rue M. le Prince. So, after a day or two given to a first cursory survey of Paris, I started across the Seine to find Eugene and compel him to do the honors of the city.

Every one who knows the Latin Quarter knows the Rue M. le Prince, running up the hill towards the Garden of the Luxembourg. It is full of queer houses and odd corners,—or was in '86,—and certainly No. 252 was, when I found it, quite as queer as any. It was nothing but a doorway, a black arch of old stone between and under two new houses painted yellow. The effect of this bit of seventeenth-century masonry, with its dirty old doors, and rusty broken lantern sticking gaunt and grim out over the narrow sidewalk, was, in its frame of fresh plaster, sinister in the extreme.

I wondered if I had made a mistake in the number; it was quite evident that no one lived behind those cobwebs. I went into the doorway of one of the new hôtels and interviewed the concierge.

No, M. d'Ardeche did not live there, though to be sure he owned the mansion; he himself resided in Meudon, in the country house of the late Mlle....