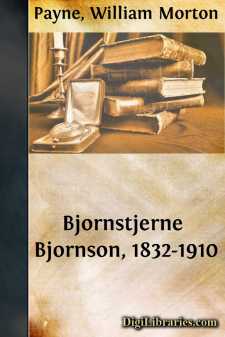 Eight years ago, taking a bird's-eye view of the mountain peaks of contemporary literature, and writing with particular reference to Björnson's seventieth birthday, it seemed proper to make the following remarks about the most famous European authors then numbered among living men. If one were asked for the name of the greatest man of letters still living in the world, the possible claimants to the distinction would hardly be more than five in number. If it were a question of poetry alone, Swinburne would have to be named first, with Carducci for a fairly close second. But if we take literature in its larger sense, as including all the manifestations of creative activity in language, and if we insist, furthermore, that the man singled out for this preëminence shall stand in some vital relation to the intellectual life of his time, and exert a forceful influence upon the thought of the present day, the choice must rather be made among the three giants of the north of Europe, falling, as it may be, upon the great-hearted Russian emotionalist who has given us such deeply moving portrayals of the life of the modern world; or upon the passionate Norwegian idealist whose finger has so unerringly pointed out the diseased spots in the social organism, earning by his moral surgery the name of pessimist, despite his declared faith in the redemption of mankind through truth and freedom and love; or, perchance, upon that other great Norwegian, equally fervent in his devotion to the same ideals, and far more sympathetic in his manner of inculcating them upon his readers, who has just rounded out his scriptural tale of three score years and ten, and, in commemoration of the anniversary, is now made the recipient of such a tribute of grateful and whole-souled admiration as few men have ever won, and none have better deserved. It would be certainly invidious, and probably futile, to attempt a nice, comparative estimate of the services of these three men to the common cause of humanity; let us be content with the admission that Björnstjerne Björnson is primus inter pares, and make no attempt to exalt him at the expense of his great contemporaries. Writing now eight years later, at the time when Björnson's death has plunged his country and the world in mourning, it is impressive to note that of the five men constituting the group above designated, Tolstoy alone survives to carry on the great literary tradition of the nineteenth century.

It will be well, however, to make certain distinctions between the life work of Björnson and that of the two men whom a common age and common aims bring into inevitable association with him. These distinctions are chiefly two,—one of them is that while Tolstoy and Ibsen grew to be largely cosmopolitan in their outlook, Björnson has much more closely maintained throughout his career the national, or, at any rate, the racial standpoint. The other is that while Tolstoy and Ibsen presently became, the one indifferent to artistic expression, and the other baldly prosaic where he was once deeply poetical, Björnson preserved the poetic impulse of his youth, and continued to give it play even in his envisagement of the most practical modern problems....