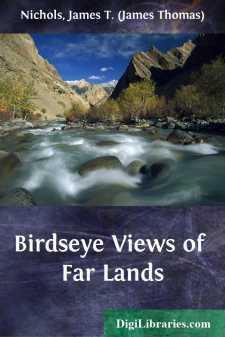 Birdseye Views of Far Lands is an interesting, wholesome presentation of something that a keen-eyed, alert traveler with the faculty of making contrasts with all classes of people in all sorts of places, in such a sympathetic way as to win their esteem and confidence, has been able to pick up as he has roamed over the face of the earth for a quarter of a century.

The book is not a geography, a history, a treatise on sociology or political economy. It is a Human Interest book which appeals to the reader who would like to go as the writer has gone and to see as the writer has seen the conformations of surface, the phenomena of nature and the human group that make up what we call a "world."

The reader finds facts indicating travel and study set forth in such vigorous, vivid style that the attention is held by a story while most valuable information is being obtained. The casual reader, the pupil in the public school and student in the high school, professional men and women, will all find the book at once highly interesting and instructive. In no other book with which I am acquainted can so much that is interesting be learned of the world in so short time and in such a pleasing way.

Teachers in rural schools will find the book especially helpful. It will inspire the pupils in the upper grades in these schools to do some observation work themselves and to in this manner seek to learn their own localities better, while at the same time it will suggest the collection of materials about other countries, their peoples, products, characteristics and importance from sources other than text books.

Every rural school as well as every high school and public library in the land should have one or more copies of this book.

The contents of this book have appeared, in substance, in Successful Farming, a magazine that has a circulation of more than eight hundred and fifty thousand copies per issue, and the book is published largely at the request of many of the readers of this journal.

The author began traveling in foreign countries many years ago. Some of the countries described in the book have been visited many times and often with unusual opportunity to see places and people as they really are.

When the writer began traveling it was with no thought of ever writing for a magazine or publishing a book. It is only natural, however, that one would read what others say about the countries he expected to visit. Travel books and articles were often read in public libraries and the habit was formed of making extensive notes, sometimes entire sentences being copied in notebook without the use of quotation marks or any reference whatever to the author. It is therefore impossible to give credit where credit is often due.

No literary merit is claimed for the book. The information was gained in every possible way and the book is sent forth hoping that it will be suggestive and helpful, especially to those who find it impossible to visit foreign lands....