Birds of the Rockies 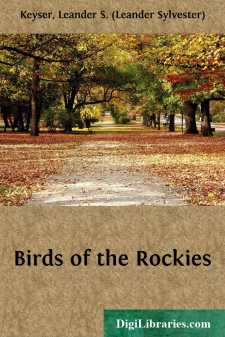 With sincere pleasure the author would acknowledge the uniform courtesy of editors and publishers in permitting him to reprint many of the articles comprised in this volume, from the various periodicals in which they first appeared.

He also desires to express his special indebtedness to Mr. Charles E. Aiken, of Colorado Springs, Colorado, whose contributions to the ornithology of the West have been of great scientific value, and to whose large and varied collection of bird-skins the author had frequent access for the purpose of settling difficult points in bird identification. This obliging gentleman also spent many hours in conversation with the writer, answering his numerous questions with the intelligence of the scientifically trained observer. Lastly, he kindly corrected some errors into which the author had inadvertently fallen.

While the area covered by the writer's personal observations may be somewhat restricted, yet the scientific bird-list at the close of the volume widens the field so as to include the entire avi-fauna of Colorado so far as known to systematic students. Besides, constant comparison has been made between the birds of the West and the allied species and genera of our Central and Eastern States. For this reason the range of the volume really extends from the Atlantic seaboard to the parks, valleys, and plateaus beyond the Continental Divide.

All are needed by each one; Nothing is fair or good alone. I thought the sparrow's note from heaven, Singing at dawn on the alder bough; I brought him home, in his nest, at even; He sings the song, but it cheers not now, For I did not bring home the river and sky;— He sang to my ear,—they sang to my eye. Ralph Waldo Emerson: Each and All. Not from his fellows only man may learn Rights to compare and duties to discern; All creatures and all objects, in degree, Are friends and patrons of humanity. There are to whom the garden, grove, and field Perpetual lessons of forbearance yield; Who would not lightly violate the grace The lowliest flower possesses in its place; Nor shorten the sweet life, too fugitive, Which nothing less than infinite Power could give. William Wordsworth: Humanity. Sounds drop in visiting from everywhere— The bluebird's and the robin's trill are there, Their sweet liquidity diluted some By dewy orchard spaces they have come. James Whitcomb Riley: A Child World. Even in the city, I Am ever conscious of the sky; A portion of its frame no less Than in the open wilderness. The stars are in my heart by night, I sing beneath the opening light, As envious of the bird; I live Upon the payment, yet I give My soul to every growing tree That in the narrow ways I see. My heart is in the blade of grass Within the courtyard where I pass; And the small, half-discovered cloud Compels me till I cry aloud. I am the wind that beats the walls And wander trembling till it falls; The snow, the summer rain am I, In close communion with the sky....
Show more
Show less