Birds in Town and Village 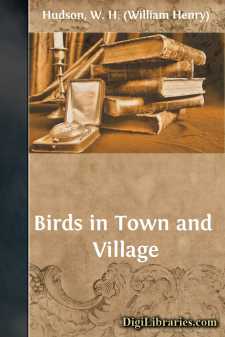 BIRDS IN A VILLAGE I

About the middle of last May, after a rough and cold period, there came a spell of brilliant weather, reviving in me the old spring feeling, the passion for wild nature, the desire for the companionship of birds; and I betook myself to St. James's Park for the sake of such satisfaction as may be had from watching and feeding the fowls, wild and semi-wild, found gathered at that favored spot.

I was glad to observe a couple of those new colonists of the ornamental water, the dabchicks, and to renew my acquaintance with the familiar, long-established moorhens. One of them was engaged in building its nest in an elm-tree growing at the water's edge. I saw it make two journeys with large wisps of dry grass in its beak, running up the rough, slanting trunk to a height of sixteen to seventeen feet, and disappearing within the "brushwood sheaf" that springs from the bole at that distance from the roots. The wood-pigeons were much more numerous, also more eager to be fed. They seemed to understand very quickly that my bread and grain was for them and not the sparrows; but although they stationed themselves close to me, the little robbers we were jointly trying to outwit managed to get some pieces of bread by flying up and catching them before they touched the sward. This little comedy over, I visited the water-fowl, ducks of many kinds, sheldrakes, geese from many lands, swans black, and swans white. To see birds in prison during the spring mood of which I have spoken is not only no satisfaction but a positive pain; here—albeit without that large liberty that nature gives, they are free in a measure; and swimming and diving or dozing in the sunshine, with the blue sky above them, they are perhaps unconscious of any restraint. Walking along the margin I noticed three children some yards ahead of me; two were quite small, but the third, in whose charge the others were, was a robust-looking girl, aged about ten or eleven years. From their dress and appearance I took them to be the children of a respectable artisan or small tradesman; but what chiefly attracted my attention was the very great pleasure the elder girl appeared to take in the birds. She had come well provided with stale bread to feed them, and after giving moderately of her store to the wood-pigeons and sparrows, she went on to the others, native and exotic, that were disporting themselves in the water, or sunning themselves on the green bank. She did not cast her bread on the water in the manner usual with visitors, but was anxious to feed all the different species, or as many as she could attract to her, and appeared satisfied when any one individual of a particular kind got a fragment of her bread. Meanwhile she talked eagerly to the little ones, calling their attention to the different birds. Drawing near, I also became an interested listener; and then, in answer to my questions, she began telling me what all these strange fowls were. "This," she said, glad to give information, "is the Canadian goose, and there is the Egyptian goose; and here is the king-duck coming towards us; and do you see that large, beautiful bird standing by itself, that will not come to be fed?...