Birds in the Calendar 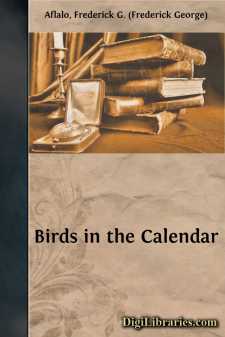 As birds are to be considered throughout these pages from any standpoint but that of sport, much that is of interest in connection with a bird essentially the sportsman's must necessarily be omitted. At the same time, although this gorgeous creature, the chief attraction of social gatherings throughout the winter months, appeals chiefly to the men who shoot and eat it, it is not uninteresting to the naturalist with opportunities for studying its habits under conditions more favourable than those encountered when in pursuit of it with a gun.

In the first place, with the probable exception of the swan, of which something is said on a later page, the pheasant stands alone among the birds of our woodlands in its personal interest for the historian. It is not, in fact, a British bird, save by acclimatisation, at all, and is generally regarded as a legacy of the Romans. The time and manner of its introduction into Britain are, it is true, veiled in obscurity. What we know, on authentic evidence, is that the bird was officially recognised in the reign of Harold, and that it had already come under the ægis of the game laws in that of Henry I, during the first year of which the Abbot of Amesbury held a licence to kill it, though how he contrived this without a gun is not set forth in detail. Probably it was first treed with the aid of dogs and then shot with bow and arrow. The original pheasant brought over by the Romans, or by whomsoever may have been responsible for its naturalisation on English soil, was a dark-coloured bird and not the type more familiar nowadays since its frequent crosses with other species from the Far East, as well as with several ornamental types of yet more recent introduction.

In tabooing the standpoint of sport, wherever possible, from these chapters, occasional reference, where it overlaps the interests of the field-naturalist, is inevitable. Thus there are two matters in which both classes are equally concerned when considering the pheasant. The first is the real or alleged incompatibility of pheasants and foxes in the same wood. The question of rivalry between pheasant and fox, or (as I rather suspect) between those who shoot the one and hunt the other, admits of only one answer. The fox eats the pheasant; the pheasant is eaten by the fox. This not very complex proposition may read like an excerpt from a French grammar, but it is the epitome of the whole argument. It is just possible—we have no actual evidence to go on—that under such wholly natural conditions as survive nowhere in rural England the two might flourish side by side, the fox taking occasional toll of its agreeably flavoured neighbours, and the latter, we may suppose, their wits sharpened by adversity, gradually devising means of keeping out of the robber's reach. In the artificial environment of a hunting or shooting country, however, the fox will always prove too much for a bird dulled by much protection, and the only possible modus vivendi between those concerned must rest on a policy of give and take that deliberately ignores the facts of the case....