Birds in the Bush 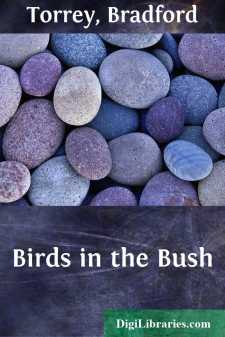 ON BOSTON COMMON. Nuns fret not at their convent's narrow room;And hermits are contented with their cells;And students with their pensive citadels:Maids at the wheel, the weaver at his loom,Sit blithe and happy; bees that soar for bloom,High as the highest Peak of Furness-fells,Will murmur by the hour in foxglove bells:In truth, the prison unto which we doomOurselves, no prison is: and hence for me,In sundry moods 't was pastime to be boundWithin the Sonnet's scanty plot of ground;Pleased if some Souls (for such there needs must be)Who have felt the weight of too much liberty,Should find brief solace there, as I have found.Wordsworth.

Our Common and Garden are not an ideal field of operations for the student of birds. No doubt they are rather straitened and public. Other things being equal, a modest ornithologist would prefer a place where he could stand still and look up without becoming himself a gazing-stock. But "it is not in man that walketh to direct his steps;" and if we are appointed to take our daily exercise in a city park, we shall very likely find its narrow limits not destitute of some partial compensations. This, at least, may be depended upon,—our disappointments will be on the right side of the account; we shall see more than we have anticipated rather than less, and so our pleasures will, as it were, come to us double. I recall, for example, the heightened interest with which I beheld my first Boston cat-bird; standing on the back of one of the seats in the Garden, steadying himself with oscillations of his tail,—a conveniently long balance-pole,—while he peeped curiously down into a geranium bed, within the leafy seclusion of which he presently disappeared. He was nothing but a cat-bird; if I had seen him in the country I should have passed him by without a second glance; but here, at the base of the Everett statue, he looked, somehow, like a bird of another feather. Since then, it is true, I have learned that his occasional presence with us in the season of the semi-annual migration is not a matter for astonishment. At that time, however, I was happily more ignorant; and therefore, as I say, my pleasure was twofold,—the pleasure, that is, of the bird's society and of the surprise.

There are plenty of people, I am aware, who assert that there are no longer any native birds in our city grounds,—or, at the most, only a few robins. Formerly things were different, they have heard, but now the abominable English sparrows monopolize every nook and corner. These wise persons speak with an air of positiveness, and doubtless ought to know whereof they affirm. Hath not a Bostonian eyes? And doth he not cross the Common every day? But it is proverbially hard to prove a negative; and some of us, with no thought of being cynical, have ceased to put unqualified trust in other people's eyesight,—especially since we have found our own to fall a little short of absolute infallibility. My own vision, by the way, is reasonably good, if I may say so; at any rate I am not stone-blind. Yet here have I been perambulating the Public Garden for an indefinite period, without seeing the first trace of a field-mouse or a shrew. I should have been in excellent company had I begun long ago to maintain that no such animals exist within our precincts. But the other day a butcher-bird made us a flying call, and almost the first thing he did was to catch one of these same furry dainties and spit it upon a thorn, where anon I found him devouring it. I would not appear to boast; but really, when I saw what Collurio had done, it did not so much as occur to me to quarrel with him because he had discovered in half an hour what I had overlooked for ten years....