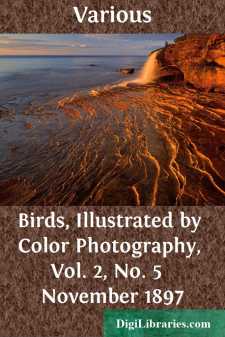 OHN JAMES AUDUBON has always been a favorite with the writer, for the invincibleness of his love of Nature and of birds is only equalled by the spontaneous freshness of his style, springing from an affectionate and joyous nature. Recently there was found by accident, in an old calf-skin bound volume, an autobiography of the naturalist. It is entitled “Audubon’s Story of his Youth,” and would make a very pretty book. As introductory to the diaries and ornithological biographies of the birds, it would be very useful.

Two or three incidents in the life of this fascinating character are interesting as showing the influence of the accidental in ultimate achievement.

“One incident,” he says, “which is as perfect in my memory as if it had occurred this very day, I have thought thousands of times since, and will now put on paper as one of the curious things which perhaps did lead me in after times to love birds, and to finally study them with pleasure infinite. My mother had several beautiful parrots, and some monkeys; one of the latter was a full-grown male of a very large species. One morning, while the servants were engaged in arranging the room I was in, ‘Pretty Polly’ asking for her breakfast as usual, ‘Du pain au lait pour le perroquet Mignonne,’ (bread and milk for the parrot Mignonne,) the man of the woods probably thought the bird presuming upon his rights in the scale of nature; be this as it may, he certainly showed his supremacy in strength over the denizen of the air, for, walking deliberately and uprightly toward the poor bird, he at once killed it, with unnatural composure. The sensations of my infant heart at this cruel sight were agony to me. I prayed the servant to beat the monkey, but he, who for some reason, preferred the monkey to the parrot, refused. I uttered long and piercing cries, my mother rushed into the room; I was tranquilized; the monkey was forever afterward chained, and Mignonne buried with all the pomp of a cherished lost one. This made, as I have said, a very deep impression on my youthful mind.”

In consequence of the long absences of his father, who was an admiral in the French navy, the young naturalist’s education was neglected, his mother suffering him to do much as he pleased, and it was not to be wondered at, as he says, that instead of applying closely to his studies, he preferred associating with boys of his own age and disposition, who were more fond of going in search of bird’s nests, fishing, or shooting, than of better studies. Thus almost every day, instead of going to school, he usually made for the fields where he spent the day, returning with his little basket filled with what he called curiosities, such as birds’ nests, birds’ eggs, curious lichens, flowers of all sorts, and even pebbles gathered along the shore of some rivulet. Nevertheless, he did study drawing and music, for which he had some talent. His subsequent study of drawing under the celebrated David, richly equipped him for a work which he did not know was ever to be his, and enabled him to commence a series of drawings of birds of France, which he continued until he had upwards of two hundred completed....