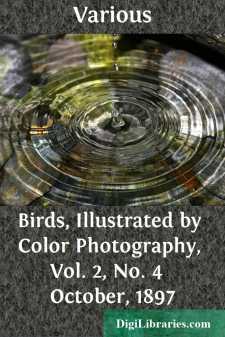 It was our intention in this article to give a number of instances of a pathetic nature concerning the sufferings of the various species of birds which it has been, and still is, a habit with many people to keep confined in cages totally inadequate for any other purpose than that of cruelty. The argument that man has no moral right to deprive an innocent creature of liberty will always be met with indifference by the majority of people, and an appeal to their intelligence and humanity will rarely prove effective. To capture singing birds for any purpose is, in many states, prohibited by statute. But the law is violated. Occasionally an example is made of one or more transgressors, but as a rule the officers of the law, whose business it should be to prevent it, manifest no interest whatever in its execution. The bird trappers as well know that it is against the law, but so long as they are unmolested by the police, they will continue the wholesale trapping. A contemporary recently said: “It seems strange that this bird-catching industry should increase so largely simultaneously with the founding of the Illinois Audubon Society. The good that that society has done in checking the habit of wearing birds in bonnets, seems to have been fairly counterbalanced by the increase in the number of songsters captured for cage purposes. These trappers choose the nesting season as most favorable for their work, and every pair of birds they catch means the loss of an entire family in the shape of a set of eggs or a nestful of young left to perish slowly by starvation.”

This is the way the trappers proceed. They are nearly all Germans. Bird snaring is a favorite occupation in Germany and the fondness for the cruel work was not left behind by the emigrants. More’s the pity. These fellows fairly swarm with their bird limes and traps among the suburbs, having an eye only to the birds of brightest plumage and sweetest song. “They use one of the innocents as a bait to lure the others to a prison.” “Two of the trappers,” says one who watched them, “took their station at the edge of an open field, skirted by a growth of willows. Each had two cage traps. The device was divided into two parts by wires running horizontally and parallel to the plane of the floor. In the lower half of each cage was a male American Goldfinch. In the roof of the traps were two little hinged doors, which turned backward and upward, leaving an opening. Inside the upper compartment of the trap, and accessible through the doorway in the roof, was a swinging perch. The traps were placed on stumps among the growth of thistles and dock weed, while the trappers hid behind the trees. The Goldfinches confined in the lower sections of the traps had been the victims of the trappers earlier in the season, and the sight of their familiar haunts, the sunlight, the breeze, and the swaying willow branches, where so often they had perched and sung, caused them to flutter about and to utter pathetically the call note of their days of freedom....