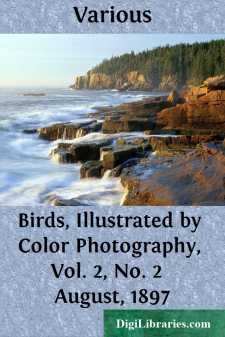 E made several early morning excursions into the woods and fields during the month of June, and were abundantly rewarded in many ways—by beholding the gracious awakening of Nature in her various forms, kissed into renewed activity by the radiance of morn; by the sweet smelling air filled with the perfume of a multitude of opening flowers which had drunk again the dew of heaven; by the sight of flitting clouds across the bluest of skies, patching the green earth with moving shadows, and sweetest of all, by the twittering, calling, musical sounds of love and joy which came to the ear from the throats of the feathered throng. How pleasant to lie prone on one’s back on the cool grass, and gaze upward through the shady green canopy of boughs, watching the pretty manoeuvers, the joyous greetings, the lively anxieties, the graceful movements, and even the sorrowful happenings of the bird-life above us.

Listen to the variety of their tones, as manifest as the difference of form and color. What more interesting than to observe their habits, and discover their cosy nests with their beautiful eggs in the green foliage? Strange that so many persons think only of making a collection of them, robbing the nests with heartless indifference to the suffering of the parents, to say nothing of the invasion which they make of the undoubted rights the birds have from nature to protection and perpetuation.

Strictly speaking, there are few birds to which the word “singing” can properly be applied, the majority of them not having more than two or three notes, and they with little suggestion of music in them. Chanticleer crows, his spouse cackles or clucks, as may be suitable to the occasion. To what ear are these noises musical? They are rather language, and, in fact, the varying notes of every species of bird have a significance which can alone be interpreted by its peculiar habits. If careful note be made of the immediate conduct of the male or female bird, as the case may be, after each call or sound, the meaning of it becomes plain.

A hen whose chicks are scattered in search of food, upon seeing a hawk, utters a note of warning which we have all heard, and the young scamper to her for protection beneath her wings. When she has laid an egg, Cut-cut-cut-cut-ot-cut! announces it from the nest in the barn. When the chicks are hatched, her cluck, cluck, cluck, calls them from the nest in the wide world, and her chick, chick, chick, uttered quickly, selects for them the dainty which she has found, or teaches them what is proper for their diet. A good listener will detect enough intonations in her voice to constitute a considerable vocabulary, which, if imitated

Here is the picture of a remarkable bird. We know him better by the name Fish Hawk. He looks much like the Eagle in July “Birds.” The Osprey has no use for Mr. Eagle though.

You know the Bald Eagle or Sea Eagle is very fond of fish. Well, he is not a very good fisherman and from his lofty perch he watches for the Fish Hawk or Osprey....