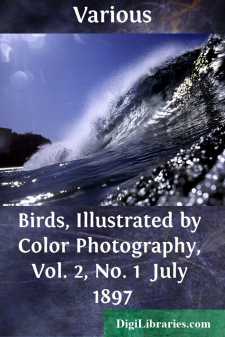 T SHOULD not be overlooked by the young observer that if he would learn to recognize at once any particular bird, he should make himself acquainted with the song and call notes of every bird around him. The identification, however, of the many feathered creatures with which we meet in our rambles has heretofore required so much patience, that, though a delight to the enthusiast, few have time to acquire any great intimacy with them. To get this acquaintance with the birds, the observer has need to be prepared to explore perilous places, to climb lofty trees, and to meet with frequent mishaps. To be sure if every veritable secret of their habits is to be pried into, this pursuit will continue to be plied as patiently as it has ever been. The opportunity, however, to secure a satisfactory knowledge of bird song and bird life by a most delightful method has at last come to every one.

A gentleman who has taken a great interest in Birds from the appearance of the first number, but whose acquaintance with living birds is quite limited, visited one of our parks a few days ago, taking with him the latest number of the magazine. His object, he said, was to find there as many of the living forms of the specimens represented as he could. “Seating myself amidst a small grove of trees, what was my delight at seeing a Red Wing alight on a telegraph wire stretching across the park. Examining the picture in Birds I was somewhat disappointed to find that the live specimen was not so brilliantly marked as in the picture. Presently, however, another Blackbird alighted near, who seemed to be the veritable presentment of the photograph. Then it occured to me that I had seen the Red Wing before, without knowing its name. It kept repeating a rich, juicy note, oncher-la-ree-e! its tail tetering at quick intervals. A few days later I observed a large number of Red Wings near the Hyde Park water works, in the vicinity of which, among the trees and in the marshes, I also saw many other birds unknown to me. With Birds in my hands, I identified the Robin, who ran along the ground quite close to me, anon summoning with his beak the incautious angle worm to the surface. The Jays were noisy and numerous, and I observed many new traits in the Wood Thrush, so like the Robin that I was at first in some doubt about it. I heard very few birds sing that day, most of them being busy in search of food for their young.”

I had hoped to show you the picture of the eagle that went through the war with the soldiers. They called him “Old Abe.” You will find on page a long story written about him. Ask some one to read it to you.

I could not get “Old Abe,” or you should now be looking at his picture. He is at present in Wisconsin, and his owner would not allow him to be taken from home.

I did the next best thing, and found one that was very much like him. They are as near alike as two children of a family. Old Abe’s feathers are not quite so smooth, though....