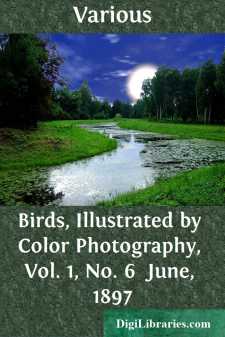 “I cannot love the man who doth not love,As men love light, the song of happy birds.”

T is indeed fitting that the great poets have ever been the best interpreters of the songs of birds. In many of the plays of Shakespeare, especially where the scene is laid in the primeval forest, his most delicious bits of fancy are inspired by the flitting throng. Wordsworth and Tennyson, and many of the minor English poets, are pervaded with bird notes, and Shelley’s masterpiece, The Skylark, will long survive his greater and more ambitious poems. Our own poet, Cranch, has left one immortal stanza, and Bryant, and Longfellow, and Lowell, and Whittier, and Emerson have written enough of poetic melody, the direct inspiration of the feathered inhabitants of the woods, to fill a good-sized volume. In prose, no one has said finer things than Thoreau, who probed nature with a deeper ken than any of his contemporaries. He is to be read, and read, and read.

But just what meaning should be attached to a bird’s notes—some of which are “the least disagreeable of noises”—will probably never be discovered. They do seem to express almost every feeling of which the human heart is capable. We wonder if the Mocking Bird understands what all these notes mean. He is so fine an imitator that it is hard to believe he is not doing more than mimicking the notes of other birds, but rather that he really does mock them with a sort of defiant sarcasm. He banters them less, perhaps, than the Cat Bird, but one would naturally expect all other birds to fly at him with vengeful purpose. But perhaps the birds are not so sensitive as their human brothers, who do not always look upon imitation as the highest flattery.

A gentleman who kept a note-book, describes one of the matinee performances of the Mocker, which he attended by creeping under a tent curtain. He sat at the foot of a tree on the top of which the bird was perched unconscious of his presence. The Mocker gave one of the notes of the Guinea-hen, a fine imitation of the Cardinal, or Red Bird, an exact reproduction of the note of the Phoebe, and some of the difficult notes of the Yellow-breasted Chat. “Now I hear a young chicken peeping. Now the Carolina Wren sings, ‘cheerily, cheerily, cheerily.’ Now a small bird is shrilling with a fine insect tone. A Flicker, a Wood-pewee, and a Phoebe follow in quick succession. Then a Tufted Titmouse squeals. To display his versatility, he gives a dull performance which couples the ‘go-back’ of the Guinea fowl with the plaint of the Wood-pewee, two widely diverse vocal sounds. With all the performance there is such perfect self-reliance and consciousness of superior ability that one feels that the singer has but to choose what bird he will imitate next.”

Nor does the plaintive, melancholy note of the Robin, that “pious” bird, altogether express his character. He has so many lovely traits, according to his biographers, that we accept him unhesitatingly as a truly good bird....