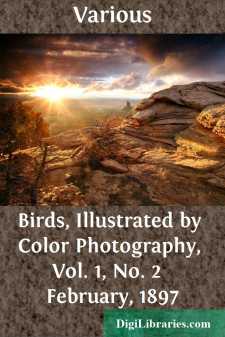 URING about three-fourths of the year the American Jay is an extremely tame, noisy and even obstrusive bird in its habits. As the breeding season approaches he suddenly becomes silent, preparing the nest in the most secluded parts of his native forests, and exercising all his cunning to keep it concealed. He is omniverous but is especially fond of eggs and young birds. The Jay may be regarded as eminently injurious though in spring he consumes a number of insects to atone for his sins of stealing fruit and berries in autumn. He is a professional nest robber, and other birds are as watchful of him as is a mother of her babe. He glides through the foliage of the trees so swiftly and noiselessly that his presence is scarcely suspected until he has committed some depredation. The Robin is his most wary foe, and when the Jay is found near his nest will pursue him and drive him from the neighborhood. He is as brave as he is active, however, and dashes boldly in pursuit of his more plainly attired neighbors who venture to intrude upon his domain.

The Jay has a curious antipathy toward the owl, perching on trees above it and keeping up a continual screeching. Some years ago an Ohio gentleman was presented with a magnificent specimen of the horned owl, which he kept for a time in a large tin cage. In favorable weather the cage was set out of doors, when it would soon be surrounded by Jays, much in the manner described of the Toucan, and an incessant screeching followed, to which the owl appeared indifferent. They would venture near enough to steal a portion of his food, the bars of his cage being sufficiently wide apart to admit them. On one occasion, however, he caught the tail of a Jay in his claws and left the tormentor without his proud appendage.

The Jay remains with us throughout the year. He is one of the wildest of our birds, the shyest of man, although seeing him most. He makes no regular migrations at certain seasons, but, unless disturbed, will live out his life close to his favorite haunts. His wings show him to be unfitted for extended flight.

Jays are most easily discovered in the morning about sunrise on the tops of young live oaks. Their notes are varied. Later in the day it is more difficult to find them, as they are more silent, and not so much on the tree tops as among the bushes.

The Jays breed in woods, forests, orchards, preferring old and very shady trees, placing their nests in the center against the body, or at the bifurcation of large limbs. The nest is formed of twigs and roots; the eggs are from four to six.

WALLOW-TAILED Indian Rollers are natives of Northeastern Africa and Senegambia, and also the interior of the Niger district....