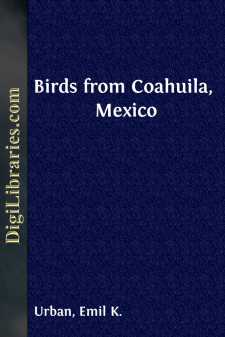 DISTRIBUTION OF THE KNOWN BREEDING BIRDS OF COAHUILA

Coahuila lies in the broad northern end of México, immediately east of the center of the continental mass. The mountains of Coahuila, which are part of the Rocky Mountain-Sierra Madre Oriental Axis, extend in a north-south direction and divide the lower lands into two areas, a larger one, a part of the Central Plateau, to the westward and a smaller one, a part of the Gulf Coastal Plain, to the northeastward. Most of the mountains of Coahuila do not exceed 6000 feet in elevation. A few peaks such as in the Sierra del Carmen, Sierra del Pino, Sierra de la Madera, Sierra Encarnación, and Sierra de Guadalupe, are more than 9000 feet high, and some more than 10,000 feet in elevation occur near the southeastern border of the State in the Sierra Madre Oriental. The Gulf Coastal Plain of northeastern Coahuila ranges from 700 feet to 1800 feet. The desert plains of the Mesa del Norte to the west of the Sierra Madre Oriental Axis are higher, more rugged, and more dissected than those of the Coastal Plain and are marked by scattered desert ranges, buttes, low hills, and knobs.

Most of Coahuila is arid. Rainfall is moderate on the Coastal Plain and is low west of the central mountains. Baker (1956:128-132) and Muller (1947:35-38) give good summary discussions of the topography and climate of Coahuila, and the reader is referred to these for further details.

Baker (1956:132) stated that "the biotic communities of Coahuila might be divided in accordance with the three physiographic areas of the State: the Gulf Coastal Plain, the mountains, and the desert plains of the Mesa del Norte." Goldman and Moore (1945:348-349) listed three biotic provinces in Coahuila: the Chihuahua-Zacatecas Biotic Province, in the western half of the State; the Tamaulipas Biotic Province, in the northeastern part of the State; and the Sierra Madre Oriental Biotic Province, in the southeastern part of the State. Merriam (1898) noted that definable portions of the Lower Sonoran Life-zone, the Upper Sonoran Life-zone, the Transition Life-zone, and the Canadian Life-zone can be distinguished in Coahuila. In my study of the distribution of the avifauna of Coahuila, I found that the three biotic provinces listed by Goldman and Moore (op. cit.) as major headings and Merriam's life-zones as supplements are the most satisfactory divisions.

The Tamaulipas Biotic Province.—This province consists of lowland plains and a few isolated ranges of low mountains. The average rainfall is 23 inches (Baker, 1956:130), considerably more than the 10 inches falling in the western part of the State. In the northeastern section of the State, the moderate amount of rain, mesic vegetation, and close proximity to the eastern migration pathway importantly influence the types of birds found.

In Coahuila, the Coastal Plain and the RГѓ­o Grande Plain lie in the path of the northernmost trade winds; they account for the more humid eastern slopes of the mountains of the northeastern part of the State (Muller, 1947:38)....