Bird Day; How to prepare for it 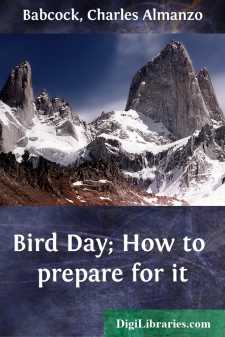 HISTORY OF THE MOVEMENT FOR "BIRD DAY"

In the spring of 1894 the writer's attention was attracted to the interest of the children in that part of their nature study which related to birds. Their descriptions of the appearance and habits of the birds they had observed were given with evident pleasure. They had a strong desire to tell what they had seen, not in the spirit of rivalry, but with the wish of adding to the knowledge of a subject in which all were equally interested.

It was thought that this work would be done with even more effectiveness if a day were appointed to be celebrated as "Bird Day." With the hope of making a memorable occasion of the day for those taking part in it, several of the noted friends of birds were asked to write something to the children, and to give their opinion of the introduction of "Bird Day" into the schools.

Secretary J. Sterling Morton, the father of "Arbor Day," responded with the following earnest letter, which was at once given to the public through Washington dispatches, and later was sent out from the Department of Agriculture, in circular No. 17:—

Dear Sir,—Your proposition to establish a "Bird Day" on the same general plan as "Arbor Day," has my cordial approval.

Such a movement can hardly fail to promote the development of a healthy public sentiment toward our native birds, favoring their preservation and increase. If directed toward this end, and not to the encouragement of the importation of foreign species, it is sure to meet the approval of the American people.

It is a melancholy fact that among the enemies of our birds two of the most destructive and relentless are our women and our boys. The love of feather ornamentation so heartlessly persisted in by thousands of women, and the mania for collecting eggs and killing birds so deeply rooted in our boys, are legacies of barbarism inherited from our savage ancestry. The number of beautiful and useful birds annually slaughtered for bonnet trimmings runs up into the hundreds of thousands, and threatens, if it has not already accomplished, the extermination of some of the rarer species. The insidious egg-hunting and pea-shooting proclivities of the small boy are hardly less widespread and destructive. It matters little which of the two agencies is the more fatal, since neither is productive of any good. One looks to the gratification of a shallow vanity, the other to the gratification of a cruel instinct and an expenditure of boyish energy that might be profitably diverted into other channels. The evil is one against which legislation can be only palliative and of local efficiency. Public sentiment, on the other hand, if properly fostered in the schools, would gain force with the growth and development of our boys and girls, and would become a hundredfold more potent than any law enacted by the State or Congress. I believe such a sentiment can be developed, so strong and so universal that a respectable woman will be ashamed to be seen with the wing of a wild bird on her bonnet, and an honest boy will be ashamed to own that he ever robbed a nest or wantonly took the life of a bird....