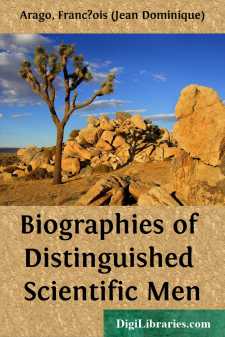 Gentlemen,—The learned man, illustrious in so many ways, whose life I am going to relate, was taken from France half a century ago. I hasten to make this remark, so as thoroughly to show that I have selected this subject without being deterred by complaints which I look upon as unjust and inapplicable. The glory of the members of the early Academy of Sciences is an inheritance for the present Academy. We must cherish it as we would the glory of later days; we must hallow it with the same respect, we must devote to it the same worship: the word prescription would here be synonymous with ingratitude.

If it had happened, Gentlemen, that amongst the academicians who preceded us, a man, already illustrious by his labours, and, without personal ambition, yet thrown, despite himself, into the midst of a terrible revolution, exposed to a thousand unrestrained passions, had cruelly disappeared in the political effervescence—oh! then, any negligence, any delay in studying the facts would be inexcusable; the honourable contemporaries of the victim would soon be no longer there to shed the light of their honest and impartial memory on obscure events; an existence devoted to the cultivation of reason and of truth would come to be appreciated only from documents, on which, for my part, I would not blindly draw, until it shall be proved that, in revolutionary times, we can trust to the uprightness of parties.

I felt in duty bound, Gentlemen, to give you a sketch of the ideas that have led me to present to you a detailed account of the life and labours of a member of the early Academy of Sciences. The biographies which will soon follow this, will show that the studies I have undertaken respecting Carnot, Condorcet, and Bailly, have not prevented me from attending seriously to our illustrious contemporaries.

To render them a loyal and truthful homage, is the first duty of the secretaries of the Academy, and I will religiously fulfil it; without binding myself, however, to observe a strict chronological order, or to follow the civil registers step by step.

Eulogies, said an ancient authority, should be deferred until we have lost the true measure of the dead. Then we could make giants of them without any one opposing us. On the contrary, I am of opinion that biographers, especially those of academicians, ought to make all possible haste, so that every one may be represented according to his true measure, and that well-informed people may have the opportunity of rectifying the mistakes which, notwithstanding every care, almost inevitably slip into this sort of composition. I regret that our former secretaries did not adopt this rule. By deferring from year to year to analyze the scientific and political life of Bailly with their scruples, and with their usual talents, they allowed time for inconsiderateness, prejudice, and passions of every kind, to impregnate our minds with a multitude of serious errors, which have added considerably to the difficulty of my task. When I was led to form very different opinions from those that are found spread through some of the most celebrated works, on the events of the great revolution of 1789, in which our fellow-academician took an active part, I could not be so conceited as to expect to be believed on my own word. To propound my opinions then was insufficient; I had also to combat those of the historians with whom I differed. This necessity has given to the biography that I am going to read an unusual length. I solicit the kind sympathy of the assembly on this point. I hope to obtain it, I acknowledge, when I consider that my task is to analyze before you the scientific and literary claims of an illustrious colleague, to depict the uniformly noble and patriotic conduct of the first President of the National Assembly; to follow the first Mayor of Paris in all the acts of an administration, the difficulties of which appeared to be above human strength; to accompany the virtuous magistrate to the very scaffold, to unroll the mournful phases of the cruel martyrdom that he was made to undergo; to retrace, in a word, some of the greatest, some of the most terrible events of the French Revolution.