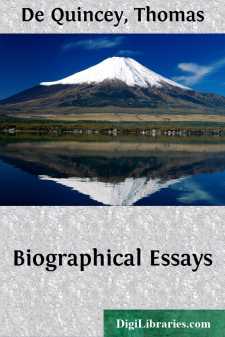 William Shakspeare, the protagonist on the great arena of modern poetry, and the glory of the human intellect, was born at Stratford-upon-Avon, in the county of Warwick, in the year 1564, and upon some day, not precisely ascertained, in the month of April. It is certain that he was baptized on the 25th; and from that fact, combined with some shadow of a tradition, Malone has inferred that he was born on the 23d. There is doubtless, on the one hand, no absolute necessity deducible from law or custom, as either operated in those times, which obliges us to adopt such a conclusion; for children might be baptized, and were baptized, at various distances from their birth: yet, on the other hand, the 23d is as likely to have been the day as any other; and more likely than any earlier day, upon two arguments. First, because there was probably a tradition floating in the seventeenth century, that Shakspeare died upon his birthday: now it is beyond a doubt that he died upon the 23d of April.

Secondly, because it is a reasonable presumption, that no parents, living in a simple community, tenderly alive to the pieties of household duty, and in an age still clinging reverentially to the ceremonial ordinances of religion, would much delay the adoption of their child into the great family of Christ. Considering the extreme frailty of an infant's life during its two earliest years, to delay would often be to disinherit the child of its Christian privileges; privileges not the less eloquent to the feelings from being profoundly mysterious, and, in the English church, forced not only upon the attention, but even upon the eye of the most thoughtless. According to the discipline of the English church, the unbaptized are buried with "maimed rites," shorn of their obsequies, and sternly denied that "sweet and solemn farewell," by which otherwise the church expresses her final charity with all men; and not only so, but they are even locally separated and sequestrated. Ground the most hallowed, and populous with Christian burials of households,

"That died in peace with one another.  Father, sister, son, and brother,"

opens to receive the vilest malefactor; by which the church symbolically expresses her maternal willingness to gather back into her fold those even of her flock who have strayed from her by the most memorable aberrations; and yet, with all this indulgence, she banishes to unhallowed ground the innocent bodies of the unbaptized. To them and to suicides she turns a face of wrath. With this gloomy fact offered to the very external senses, it is difficult to suppose that any parents would risk their own reproaches, by putting the fulfilment of so grave a duty on the hazard of a convulsion fit. The case of royal children is different; their baptisms, it is true, were often delayed for weeks but the household chaplains of the palace were always at hand, night and day, to baptize them in the very agonies of death. [Endnote: 3] We must presume, therefore, that William Shakspeare was born on some day very little anterior to that of his baptism; and the more so because the season of the year was lovely and genial, the 23d of April in 1564, corresponding in fact with what we now call the 3d of May, so that, whether the child was to be carried abroad, or the clergyman to be summoned, no hindrance would arise from the weather....