Biographia Scoticana (Scots Worthies) A Brief Historical Account of the Lives, Characters, and Memorable Transactions of the Most Eminent Scots Worthies 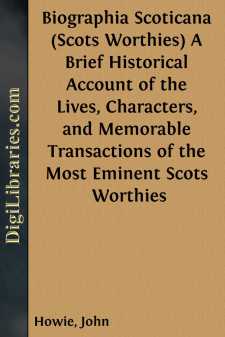 The design of the following work was to collect from the best authorities, a summary account of the lives characters and contendings of a certain number of our more renowned Scots Worthies, who for their faithful services, ardent zeal, constancy in sufferings, and other Christian graces and virtues, deserve a most honourable memorial in the church of Christ;—and for which their names both have and will be savoury to all the true lovers of our Zion, while reformation-principles are regarded in Scotland.

But then perhaps at first view, some may be surprized to find one so obscure appear in a work of this nature, especially when there are so many fit hands for such an employment. But if the respect I have for the memories of these worthies; the familiar acquaintance and sweet fellowship that once subsisted betwixt some of my ancestors and some of them; but, above all, the love and regard which I have for the same cause which they owned and maintained, be not sufficient to apologize for me in this; then I must crave thy patience to hear me in a few particulars; and that both anent the reasons for this publication, and its utility: Which I hope will plead my excuse for this undertaking.

And First, Having for some time had a desire to see something of this kind published, but finding nothing thereof, except a few broken accounts interspersed throughout different publications yet in print, at last I took up a resolution to publish a second edition of the life of one of these worthies already published at large.—Yet, upon farther reflection, considering it would be better to collect into one volume, the most material relations (of as many of our Scots worthies as could be obtained) from such of the historical records, biographical accounts, and other authenticated manuscripts, as I could have access unto, with the substance of these lives already in print, which, being put altogether, I thought would not only prove more useful in giving the reader the pleasure of viewing that all at once, which before was scattered up and down in so many corners, but also at the same time it might be free of the inconveniences that little pamphlets often fall under. And yet at the same time I am aware that some may expect to find a more full account of these worthies, both as to their number and the matters of fact in the time specified, than what is here to be met with—But in this publication, it is not pretended to give an account of all our Scots worthies, or their transactions: For that were a task now altogether impracticable, and that upon several accounts. For,

1st, There have been many of different ranks and degrees of men famous in the church of Scotland, of whom little more is mentioned in history than their names, places of abode, and age wherein they existed, and scarcely that. Again, there are many others, of whom the most that can be said is only a few faint hints, which of necessity must render their lives (if they may properly be so called) very imperfect, from what they might and would have been, had they been collected and wrote near a century ago, when their actions and memories were more fresh and recent; several persons being then alive, who were well acquainted with their lives and proceedings, whereby they might have been confirmed by many uncontestible evidences that cannot now possibly be brought in; yea, and more so, seeing there is a chasm in our history during the time of the Usurper, not to mention how many of our national records were about that time altogether lost.

2dly, There are several others, both in the reforming and suffering periods, of whom somewhat now is recorded, and yet not sufficient to form a narrative of, so that, excepting by short relations or marginal notes, they cannot otherwise be supplied.—For it is with regret that the publishers have it to declare, that, upon application unto several places for farther information concerning some of these worthy men, they could find little or nothing in the most part of their registers (excepting a few things by way of oral tradition) being through course of time either designedly, or through negligence lost....