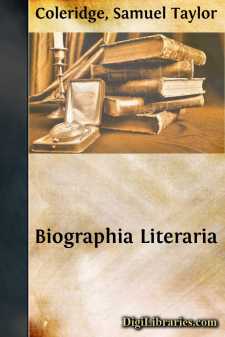 Motives to the present work—Reception of the Author's first publication—Discipline of his taste at school—Effect of contemporary writers on youthful minds—Bowles's Sonnets—Comparison between the poets before and since Pope.

It has been my lot to have had my name introduced both in conversation, and in print, more frequently than I find it easy to explain, whether I consider the fewness, unimportance, and limited circulation of my writings, or the retirement and distance, in which I have lived, both from the literary and political world. Most often it has been connected with some charge which I could not acknowledge, or some principle which I had never entertained. Nevertheless, had I had no other motive or incitement, the reader would not have been troubled with this exculpation. What my additional purposes were, will be seen in the following pages. It will be found, that the least of what I have written concerns myself personally. I have used the narration chiefly for the purpose of giving a continuity to the work, in part for the sake of the miscellaneous reflections suggested to me by particular events, but still more as introductory to a statement of my principles in Politics, Religion, and Philosophy, and an application of the rules, deduced from philosophical principles, to poetry and criticism. But of the objects, which I proposed to myself, it was not the least important to effect, as far as possible, a settlement of the long continued controversy concerning the true nature of poetic diction; and at the same time to define with the utmost impartiality the real poetic character of the poet, by whose writings this controversy was first kindled, and has been since fuelled and fanned.

In the spring of 1796, when I had but little passed the verge of manhood, I published a small volume of juvenile poems. They were received with a degree of favour, which, young as I was, I well know was bestowed on them not so much for any positive merit, as because they were considered buds of hope, and promises of better works to come. The critics of that day, the most flattering, equally with the severest, concurred in objecting to them obscurity, a general turgidness of diction, and a profusion of new coined double epithets [1]. The first is the fault which a writer is the least able to detect in his own compositions: and my mind was not then sufficiently disciplined to receive the authority of others, as a substitute for my own conviction. Satisfied that the thoughts, such as they were, could not have been expressed otherwise, or at least more perspicuously, I forgot to inquire, whether the thoughts themselves did not demand a degree of attention unsuitable to the nature and objects of poetry. This remark however applies chiefly, though not exclusively, to the Religious Musings. The remainder of the charge I admitted to its full extent, and not without sincere acknowledgments both to my private and public censors for their friendly admonitions. In the after editions, I pruned the double epithets with no sparing hand, and used my best efforts to tame the swell and glitter both of thought and diction; though in truth, these parasite plants of youthful poetry had insinuated themselves into my longer poems with such intricacy of union, that I was often obliged to omit disentangling the weed, from the fear of snapping the flower....