Big Game A Story for Girls 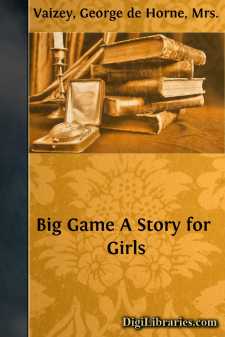 It was the old story of woman comforting man in his affliction; the trouble in this instance appearing in the shape of a long blue envelope addressed to himself in his own handwriting. Poor young poet! He had no more appetite for eggs and bacon that morning; he pushed aside even his coffee, and buried his head in his hands.

“So they will be, some day,” comforted the woman. “You have only to be patient and go on trying. I’ll re-type the first and last pages, and iron out the dog’s ears, and we will send it off on a fresh journey. Why don’t you try the Pinnacle Magazine? There ought to be a chance there. They published some awful bosh last month.”

The poet was roused to a passing indignation.

“As feeble as mine, I suppose! Oh, well, if even you turn against me, it is time I gave up the struggle.”

“Even you” was not in this instance a wife, but “only a sister,” so instead of falling on her accuser’s neck with explanations and caresses, she helped herself to a second cup of coffee, and replied coolly—

“Silly thing! You know quite well that I do nothing of the sort, so don’t be high-falutin. I should not encourage you to waste time if I did not know that you were going to succeed in the end. I don’t think; I know!”

“How?” queried the poet. “How?” He had heard the reason a dozen times before, but he longed to hear it again. He lifted his face from his hands—an ideal face for a poet; clean-cut, sensitive, with deep-set eyes, curved lips, and a finely-modelled chin. “How do you know?”

“I feel!” replied the critic simply. “Of course, I am prejudiced in favour of your work; but that would not make it haunt me as if it were my own. I can see your faults; you are horribly uneven. There are lines here and there which make me cold; lines which are put in for the sake of the rhyme, and nothing more; but there are other bits,”—the girl’s eyes turned towards the window, and gazed dreamily into space—“which sing in my heart! When it is fine, when it is dark, when I am glad, when I am in trouble, why do your lines come unconsciously into my mind, as if they expressed my own feelings better than I can do it myself? That’s not rhyme—that’s poetry! It is the real thing; not pretence.”

A glad smile passed over the boy’s face; he stretched out his hand towards the neglected cup, and quaffed coffee and hope in one reviving draught. “But no one seems to want poetry nowadays!”

“True! I think you may have to wait until you have made a name in the other direction. Why not try fiction? Your prose is excellent, almost as good as your verse.”

“Bah! you are behind the times, my dear! You don’t need a plot. Begin in the middle, meander back to the beginning, and end in the thick of the strife. Then every one wonders and raves, and the public—‘mostly fools!’—think it must be clever, because they don’t understand what it’s about.”

“Like the lady and the tiger,—which came out first?”