Between the Lines Secret Service Stories Told Fifty Years After 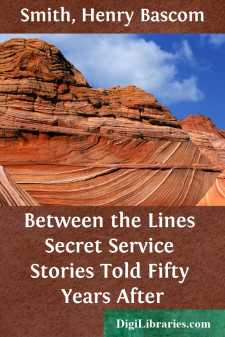 Fifty years ago! Gracious me! It makes me think of my age to talk of it. Yes, just fifty years ago was enacted the greatest tragedy the world ever saw, THE CIVIL WAR.

At different times I have told of some of my experiences, which seemed to interest. Sometimes I have talked to literary men, story writers, who have expressed a desire to write me up in magazines and newspapers, but lack of the romantic in my make up, notwithstanding romance might be seen in the stories which to me were but cold facts, has kept me from consenting.

I am actuated now by other reasons. I have a lot of documents and memoranda that are wearing out, liable to be mislaid or lost. In fact I have already lost one document, a letter from General Lew Wallace, a very valuable and important one (to me); it was his letter of presentation to me of the Harry Gilmor sword, written on the eve of his departure for Texas (on a secret mission, known only to Lincoln and Grant), to receive the capitulation of the Confederate General Slaughter, hence I feel that these matters ought to be recorded somewhere.

The New York Historical Society and Columbia University have offered some of these documents place in their archives. The affidavit and signature of Paine, the Conspirator who attempted to assassinate Secretary Seward, ought to be in some substantial depository as a link in history. I presume it is the only finger mark extant of any of the conspirators. The reason why I have not deposited it is that the statement appears garbled, requiring me to explain the gaps and hidden meanings between the lines, which I shall try to do in these pages.

Another motive for putting these experiences in writing, is in the interest of Graham, and his children, Curtis, Evelyn and her children, Nettie and DeLos. It is to be expected these younger ones will remain longer here under the old Flag, and perhaps they may get some consolation from the fact that some of their ancestors did something in simple patriotism. Nettie has complained that her school history did not mention her uncle. I told her I could only be found by reading "between the lines," because there were so many "pebbles on the beach" besides her uncle.

But how can I make it interesting? I am afraid I shall injure the facts in trying to write them. A story writer might make a romance out of almost any one of my stories, for he would dress it up so. Every day and hour of my Secret Service experience was crowded with events; they came swift one after another; for instance the Election Fraud case of 1864 to which Appleton's Encyclopedia devotes columns, took less than five days to develop; the story would take nearly as long to tell.

BETWEEN THE LINES SECRET SERVICE STORIES FILE I.

The sword of Harry Gilmor, the Confederate colonel, which General Wallace had given me, had aroused Graham's interest so much that I presented it to him; I had, prior to this, presented to Curtis, my Creedmoor rifle trophies....