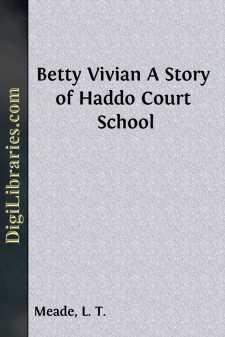 CHAPTER I YES OR NO

Haddo Court had been a great school for girls for many generations. In fact, for considerably over a century the Court had descended from mother to daughter, who invariably, whatever her husband’s name, took the name of Haddo when she became mistress of the school. The reigning mistress might sometimes be unmarried, sometimes the reverse; but she was always, in the true sense of the word, a noble, upright, generous sort of woman, and one slightly in advance of her generation. There had never been anything low or mean known about the various head mistresses of Haddo Court. The school had grown with the times. From being in the latter days of the eighteenth century a rambling, low old-fashioned house with mullioned windows and a castellated roof, it had gradually increased in size and magnificence; until now, when this story opens, it was one of the most imposing mansions in the county.

The locality in which Haddo Court was situated was not very far from London; but for various reasons its name will be withheld from the reader, although doubtless the intelligent girl who likes to peruse these pages will be easily able to discover its whereabouts. Haddo Court, although within a measurable distance of the great metropolis, had such large grounds, and such a considerable area of meadow and forest land surrounding it, that it truly seemed to the girls who lived there that they were in the heart of the country itself. This was indeed the case; for from the Court you could see no other house whatsoever, unless it were the picturesque abode of the head gardener or that of the lodge-keeper.

The school belonged to no company; it was the sole and undivided possession of the head mistress. It combined the advantages of a first-class high school with the advantages that the best type of private school affords. Its rooms were lofty and abundantly supplied with bright sunshine and fresh air. So popular was the school, and such a tone of distinction did it confer upon the girls who were educated there, that, although Mrs. Haddo did not scruple to expect high fees from her pupils, it was as difficult to get into Haddo Court as it was for a boy to become an inmate of Winchester or Eton. The girl whose mother before her had been educated at the Court usually put down her little daughter’s name for admission there shortly after the child’s birth, and even then she was not always certain that the girl could be received; for Mrs. Haddo, having inherited, among other virtues from a long line of intelligent ancestors, great firmness of character, made rules which she would allow no exception to break.

The girls at Haddo Court might number one hundred and fifty; but nothing would induce her, on any terms whatsoever, to exceed that number. She had a staff of the most worthy governesses, many of whom had been educated at the Court itself; others who bore testimony to the lamented and much-loved memory of the late Miss Beale of Cheltenham; and others, again, who had taken honors of the highest degree at the two universities....