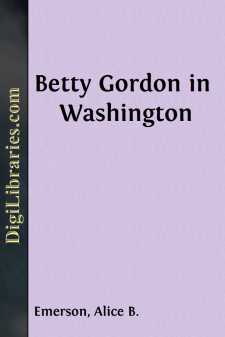 CHAPTER I THE GORED COW

For lack of a better listener, Betty Gordon addressed the saucy little chipmunk that sat on the top rail of the old worn fence and stared at her with bright, unwinking eyes.

"It is the loveliest vase you ever saw," said Betty, busily sorting the tangled mass of grasses and flowers in her lap. "Heavy old colonial glass, you know, plain, but with beautiful lines."

The chipmunk continued to regard her gravely.

"I found it this morning when I was helping Mrs. Peabody clean the kitchen closet shelves," the girl went on, her slim fingers selecting and discarding slender stems with fascinating quickness. "It was on the very last shelf, and was covered with dust. I washed it, and we're going to have it on the supper table to-night with this bouquet in it. There! don't you think that's pretty?"

She held out the flowers deftly arranged and surveyed them proudly. The chipmunk cocked his brown head and seemed to be withholding his opinion.

Betty put the bouquet carefully down on the grass beside her and stretched the length of her trim, graceful self on the turf, burying her face luxuriously in the warm dry "second crop" of hay that had been raked into a thin pile under the pin oak and left there forgotten. Presently she rolled over and lay flat on her back, studying the lazy clouds that drifted across the very blue sky.

"I'd like to be up in an airplane," she murmured drowsily, her eyelids drooping. "I'd sail right into a cloud and see—What was that?"

She sat up with a jerk that sent the hitherto motionless chipmunk scurrying indignantly up the nearest tree, there to sit and shake his head angrily at her.

"Sounds like Bob!" said Betty to herself. "My goodness, that was Mr.Peabody—they must be having an awful quarrel!"

The voices and shouts came from the next field, separated from her by a brook, almost dry now, and a border of crooked young willow trees grown together in an effective windbreak.

"Anybody who'll gore a cow like that isn't fit to own a single dumb creature!" A clear young voice shaking with passion was carried by the wind to the listening girl.

"When I need a blithering, no-'count upstart to teach me my business, I'll call on you and not before," a deeper, harsh voice snarled. "When you're farming for yourself you can feed the neighbors' critters on your corn all you've a mind to!"

"Oh, dear!" Betty scrambled to her feet, forgetting the bouquet so carefully culled, and darted in the direction of the willow hedge. "I do hope Mr. Peabody hasn't been cruel to an animal. Bob is always so furious when he catches him at that!"

She crossed the puttering little brook by the simple expedient of jumping from one bank to the other and scrambled through the willow trees, emerging, flushed and anxious-eyed, to confront a boy about fourteen years old in a torn straw hat and faded overalls and a tall, lean middle-aged man with a pitchfork in his hands.

"Well?" the latter grunted, as Betty glanced fearfully at him. "What did you come for? I suppose you think two rows of corn down flat is something to snicker at?"

They stood on the edge of a flourishing field of corn, and, following the direction of Mr....