Beth Norvell A Romance of the West 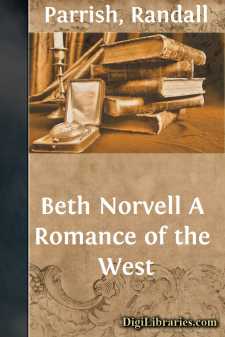 CHAPTER I A CHANCE MEETING

There were nine altogether in the party registering. This number included the manager, who, both on and off the stage, quite successfully impersonated the villain—a rather heavy-jawed, middle-aged fellow, of foreign appearance, with coarse, gruff voice; three representatives of the gentler sex; a child of eight, exact species unknown, wrapped up like a mummy; and four males. Beyond doubt the most notable member of the troupe was the comedian "star," Mr. T. Macready Lane, whose well-known cognomen must even now awaken happy histrionic memories throughout the western circuit. The long night's ride from their previous stand, involving as it did two changes of trains, had proven exceedingly wearisome; and the young woman in the rather natty blue toque, the collar of her long gray coat turned up in partial concealment of her face, was so utterly fatigued that she refused to wait for a belated breakfast, and insisted upon being at once directed to her room. There was a substantial bolt decorating the inside of the door, but, rendered careless by sheer exhaustion of both mind and body, she forgot everything except her desire for immediate rest, dropped her wraps upon the only chair visible, and flung herself, fully dressed, upon the bed. Her cheek had barely pressed the hard pillow before she was sleeping like a tired child.

It must have been an hour later when Winston drove in from Flat Rock, shook the powdery snow from off his long fur overcoat, his cheeks still tingling from the sharp wind, and, with fingers yet stiffened by cold, wrote his name carelessly across the lower line of the dilapidated hotel register.

"Can you let me have the same room, Tom?" he questioned familiarly of the man ornamenting the high stool behind the desk.

The latter, busy with some figures, nodded carelessly, and the last arrival promptly picked up his valise from the floor and began climbing the stairs, whistling softly. He was a long-limbed, broad-chested young fellow, with clean-shaven face, and a pair of dark-gray eyes that looked straight ahead of him; and he ran up the somewhat steep steps as though finding such exercise a pleasure. Rounding the upper railing, he stopped abruptly before Number Twenty-seven, flung open the door, took a single step within, and came to a sudden pause, his careless whistling suspended in breathless surprise. With that single glance the complete picture became indelibly photographed upon his memory,—the narrow, sparsely furnished room with roughly plastered walls; the small, cheap mirror; the faded-green window curtain, torn half in two; the sheet-iron wash-stand; the wooden chair, across which rested the gray coat with the blue toque on top; and the single cot bed bearing its unconscious occupant.

Somehow as he gazed, his earliest conscious emotion was that of sympathy—it all appeared so unspeakably pathetic, so homesick, so dismally forlorn and barren. Then that half-upturned face riveted his attention and seemed to awaken a vague, dreamy memory he found himself unable to localize; it reminded him of some other face he had known, tantalizing from its dim indistinctness....