Betelguese A Trip Through Hell 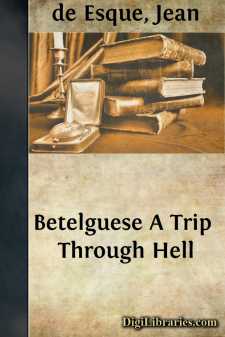 To the readers of this poem an apology is needed for affixing thereto a praem. Some friends of mine have been plaguing me beyond the restrictive line of Patience for the true cause of conceiving the accompanying collection of words, balderdash or what you will, some even asseverating with the eruditeness of an Aristole that it was a nebulous idea, an embryonic form of thought hibernating within the cavities of my sinciput's inner apex, the remnants of that wild phantasmagoric dream of "vicious, vulpine labyrinths of hell," partly expounded in my "The Flight of a Soul."

Now to satisfy everybody but my friends I throw my prejudices to the winds and confess, to wit: That I, with the buckler of Will, wooed Oblivion on September the sixth at exactly 5 p.m., having been up at my desk mauling and drubbing the English language with a vengeance for thirty-six consecutive hours, and that I awoke at 12.30 a.m. that selfsame night with the entire contents of the accompanying——? (have as yet not decided in what category the critics will consign this weird hypotyposis of the Supernal) jingling through my tired brain. I set to work at exactly 12.45 a.m. and wrote until our esteemed companions of the nocturnal hours ceased their unloved music (mosquitos), 5.05 a.m., hied myself back to bed and hypothecated as many winks as Dame Slumber saw fit to allot to me, who am at continued war with her silent wand. The same tactics were employed during the succeeding fifteen nights, wherein I penned eight thousand one hundred and sixteen (8116) lines. This is the truth, the whole and integral truth, and nothing but the unexpurgated truth, so help me Muse (she's blind as a bat) and Satan, of whom I've writ in such an unbecoming manner that, henceforth, I must perforce seek my future Elysian in other haunts than those of the above named Cosmopoietic's own, for fear that his uncoped wrath may blast me into an ape-faced minstrel or, like one red-haired varlet draped with the cognomen of "Nero," use my unbleached bones for illuminating the highway to his insidiate lair.

To the readers this question may present itself, to wit: Why place Hell in the bowels of Betelguese? Why not the sun or moon?

In the first instance the former sphere is eliminated as a possibility on account of its nature. Being a huge nucleous mass of aëriform fluid, nothing containing animal or vegetable life could possibly exist either on or within its bowels. The moon, too, is excluded for the same reason as is our earth, it having at one time been a part of the latter, broken off by one of the giant planets long before the pleioncene era. Betelguese being a celestial pariah, an outcast, the largest of all known comets or outlawed suns in the universe; and, further, so long as Hell has not been definitely placed, why not figure this hybrid planet as a possibility?

Astronomers throughout the world remember the colossal outburst in the constellation Perseus that occurred on February 20, 1901, when one sun exploded, or two made collision with appalling force....